When Wilfred Moreno was told he had oral cancer, he researched who in New York City had the expertise to help him and found Dr. Eric M. Genden, Chair of the Department of Otolaryngology – Head and Neck Surgery at the Mount Sinai Health System and Director of the Head and Neck Institute at The Mount Sinai Hospital. “I read he has extensive experience in treating oral cancer,” Wilfred commented. “He also conducts a lot of research in the field of head and neck cancer, and was an early practitioner of robotic surgery for oral cancers. It was critical for me to choose a physician who was proficient in robotics, as I felt that was the best option for me.” 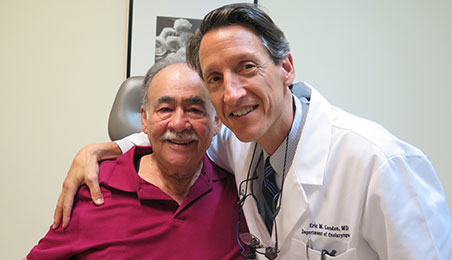 This was confirmed when Wilfred visited primary care physician, Dr. Carlos Rios, who relayed that Dr. Genden was very accomplished in treating head and neck cancers and robotic surgery. “The surgeon needs to be precise with robotic surgery and master control over the robotic arms,” Wilfred remarked. “It was very important that my surgeon was an expert in robotics.”

When he met Dr. Genden in May 2015, Wilfred was very impressed with him. “He was very confident and he made me feel like he was taking care of me personally.”

“Due to the nature of Mr. Moreno’s cancer, he was a candidate for either combined chemoradiotherapy or robotic surgery,” remarks Dr. Genden. “Upon reviewing his scans, there was no obvious spread to his lymph nodes, which offered a greater change to eliminate or decrease postoperative radiotherapy and preserve his quality of life and sense of taste.”

Transoral Robotic Surgery with No Chemotherapy or Radiation Post-Surgery

Wilfred underwent transoral robotic surgery (TORS) with Dr. Genden two weeks after his visit on May 19, 2015. Sometimes removal of oral and throat cancers requires follow-up chemotherapy and/or radiation, but Wilfred did not require either after surgery.

“The true value of robotic surgery is that it often allows us to treat these cancers without the patients having to endure the toxic effects of radiation or chemotherapy,” Dr. Genden noted. “This was the case and Mr. Marino’s treatment.”

“My recovery was just three days in the hospital,” Wilfred recalls. “I was on a liquid diet for about three weeks and slowly added more solid foods. Now I am back to eating everything without a problem. And I was very grateful that neither chemotherapy nor radiation was required after surgery.”

Wilfred also appreciates the help of the entire staff – those in the operating room, assisting him post-surgery, and overall those in contact with him throughout the process. “The staff were all very nice,” he says smiling. “They were all attentive and very professional.”

Today, Wilfred shows no evidence of cancer left, and he is extremely grateful for having found Dr. Genden. “I tell Dr. Genden every time I see him that he’s the best! If I had to do this all over again, I wouldn’t choose anyone else. He had the confidence in what he was going to do and he took special care of me. He was the absolute best surgeon for me. He is my hero.”