“I was 17 when I was pregnant with Anthony,” Lucy Valladarez recalled. “It was a normal pregnancy with no complications. Anthony was born at Harlem Hospital in August 2005, and we noticed something was wrong with him when he was delivered. The care team took him directly to the ICU and from there, several specialists evaluated him. They noticed problems with his jaw and that he had a cleft palate, and after a few days, they diagnose him with Goldenhar syndrome [a rare birth defect associated with abnormal development of the ear, nose, lip, mandible, and soft palate].” 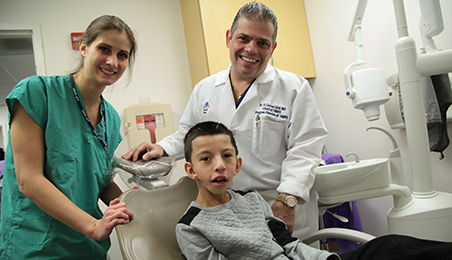 Lucy’s medical team then transferred Anthony to Columbia Presbyterian Medical Center when he was just two weeks old. It was there that they met Vincent Carrao, DDS, MD, now Chief of Oral and Maxillofacial Surgery at The Mount Sinai Hospital, who performed Anthony’s first surgery at three months old.

“Because Anthony was born with a small jaw missing bone on the right side, we knew multiple surgeries were going to be required for Anthony’s case,” remarked Dr. Carrao. “So we performed a mandibular (jaw) distraction procedure on his left side with anticipation of a future bone graft to reconstruct the right side. We also anticipated a future bilateral (both sides) distraction post grafting as part of Anthony’s treatment plan.”

The unilateral mandibular distraction on Anthony’s left side required Dr. Carrao to place screws in Anthony’s jaw to help bring it forward. Goldenhar syndrome can cause difficulties with eating and breathing, as the tiny jaw often causes the tongue to settle in the back of the throat, where it can lead to blockage of swallowing and breathing.

When Anthony was four months old, he was experiencing problems breathing and was diagnosed with a viral syndrome. He underwent a tracheotomy, which involves an incision in the neck and creating an opening in the trachea (tracheostomy) to serve as an independent airway for a tube to be inserted. This enables breathing without the nose or mouth.

At six months, Dr. Carrao removed the screws in Anthony’s jaw, but Anthony was transferred to a rehabilitation hospital for the following six months to ensure he was breathing as best as possible. At 13 months old, he was released from the hospital, but still experiencing multiple difficulties breathing and swallowing.

“We did rehab every day with a two-hour drive and had various machines at home, such as a ventilator and oxygen tanks, and a nurse came to help in the evenings,” Lucy explained. “Anthony had some really tough days.”

Years passed with Anthony feeding through a gastrostomy tube (G-tube) that is inserted through the abdomen to deliver nutrition directly to the stomach. When Anthony turned five, Dr. Carrao performed a bone graft using Anthony’s own rib to reconstruct the right side of his jaw. The bone in Anthony’s jaw had been missing since birth, but was replaced through the procedure.

Six months later, Dr. Carrao performed the bilateral distraction on both sides of his jaw. “The purpose of this procedure was not only to advance the jaw forward, but also allowed for adequate opening of his airway, as his tongue was able to rest more anteriorly,” he noted.

“Anthony was finally able to have food and eat,” Lucy said, smiling with relief in her eyes. “He didn’t know how to chew since birth, since everything was pureed through the G-tube. But little by little, he learned how to eat.” More good news came when Anthony turned seven: the tracheostomy was removed because his airway had been cleared by Dr. Carrao.

How Jaw Surgeries Transformer Their Lives

“I was scared from day one,’ Lucy recounts. “I had to learn a lot of medical terminology and had to grow up quickly and leave everything behind to dedicate my whole self to Anthony.” But these days, Anthony is a busy boy, just like his friends. He goes to school and is a whippersnapper with Mom’s smartphone.

“Now his breathing and his speech are great – he now speaks clearly and his face really changed,” Lucy beamed with her arm around her son. “Dr. Carrao is wonderful and everything has been great at Mount Sinai. Because of Dr. Carrao’s surgeries, we were able to remove Anthony’s trache and he developed very good speech. HE went from basically having no jaw and no space to breathe to sleeping fine.”

“If it wasn’t for Dr. Carrao, Anthony might still not be speaking, eating and swallowing normally. We don’t have the feeding machine anymore and his sleeping has improved dramatically. He has transformed not just Anthony’s quality of life, but my quality of life as well! Dr. Carrao is the best!”

As for Anthony, he says, “Thank you, Dr. Carrao” and “I’m doing much better!”