Being a middle school teacher, it isn’t uncommon for me to lose my voice. In late November of 2013, I began to lose my voice and it only got worse as time went on.  Finally, with the prodding of my wife and father I went to get checked out by my ENT (ear, nose and throat) doctor, Joel Portnoy, MD, of ENT and Allergy Associates. He scoped my throat and saw something abnormal and decided to biopsy my vocal fold in the office. After a week, he called me and told me that the results came back as abnormal cells. He informed me that I would need to meet with a specialist in order to save my voice. He said that his office was associated with The Mount Sinai Hospital. 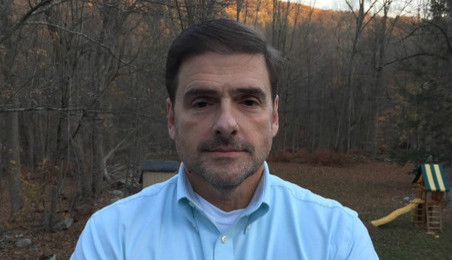 When I met with Dr. Altman, he had all of the ENT doctors’ notes and lab results on hand, which made it very easy for the both of us. He explained that frequently, these abnormal cells are on top of a more serious condition. As a result, he told me that he would like to perform a surgical biopsy to obtain a definitive diagnosis, so he scheduled the procedure.

This procedure was done quickly and with very little stress. After five day, the results came back as stage 1A cancer of the right vocal fold. Dr. Altman said that this type of cancer was the most treatable and the usual treatment for this type of cancer was radiation. My concern was if I could continue working during my treatment, because he informed me that I would probably feel some fatigue during the treatment. I went through five days a week for six weeks of treatments while working full time, but the cancer was not totally destroyed.

With the failure of the radiation treatment, Dr. Altman informed me that my only option was surgery. Due to the difficult placement of the cancer, there would not be enough room to remove it via traditional methods. As a result, the surgery would entail the opening up of my throat to remove the cancer and reconstructing my vocal fold.  I asked him what my voice would be like after the surgery. He said I would be able to speak, but my voice would never be the same. He then assured me that Mount Sinai had a very good surgeon who preforms many of these surgeries and has had very good results.

The following week I met with Brett Miles, DDS MD, for a consultation. He reviewed all of the test results and informed me that the typical operation was to go through the front of my throat and remove the cancer and the vocal fold. Like Dr. Altman, Dr. Miles told me that my voice would never be the same again and added that I may not be able to continue my career as a teacher.

“The treatment of larynx cancer that recurs or does not respond to radiation is surgical removal of the cancer,” explained Dr. Miles. “For advanced cases this involves removing the entire larynx (voice box). Traditionally smaller cancers are removed with transoral laser surgery, a procedure in which a laser system is used to remove the cancer through the patient’s mouth. In a small number of cases, such as Mr. Benedicts, previous therapy or anatomical factors do not allow a wide enough mouth opening to place the retractor system for the laser. The traditional solution would be to perform surgery through the neck and remove part of the larynx.”

“Break My Jaw” Inspired Discussion of an Alternate Cancer Surgery

Being the wise guy that I am, I told him that I don’t care if he had to break my jaw and knock out my teeth, just get the cancer out of me. Dr. Miles said, “Now that you mention it, I have been working on one procedure to deal with a situation just like this.” Looking to save my voice by whatever means possible, I had him explain the procedure. Dr. Miles began by explaining that the first thing he would do would be to cut my lower jaw in half between my middle lower teeth. He would then pull my jaw apart and pull my tongue through the new gap to allow Dr. Altman to preform the cancer removal. Lastly, Dr. Miles explained that he would join the two parts of my jaw back together by plates and screws. I told him to go for it!

“By coupling techniques used by oral and maxillofacial surgeons during corrective jaw surgery, and transoral laser surgical techniques used by head and neck surgeons, we were able to remove Mr. Benedict’s cancer without entering his neck, which resulted in an improved voice outcome and less invasive surgery,” Dr. Miles reported. “This was of vital importance to him as a teacher.”

Two weeks later, I met with both surgeons prior to the actual operation. They informed me that if Dr. Miles procedure provided enough room, a laser would be used to take a frozen section biopsy until the sample came back without cancer.  Luckily, only one cut was necessary, and as a result, only a small amount of my vocal fold was actually removed.  After recovery, Dr. Miles and Dr. Altman met with me to explain that the procedure Dr. Miles performed gave enough room to remove all of the cancer and save my voice.  After many weeks of recovery, I began to eat again and I started speech therapy in the same office as Dr. Miles.

A year to the day, I am cancer free and as for my voice, I am almost back to normal.  It is just somewhat gravelly, but it continues to get stronger. This is all due to the excellent treatment I received at Mount Sinai, especially the innovative procedure performed by Dr. Miles! Without him, I would not be able to continue as a middle school teacher and not be able to tell my wife and son how much I love them!

Thank you Dr. Miles and the entire Mount Sinai Hospital staff for saving my voice and giving me my quality of life back!