On a Thursday night in December 2012, Heather Cohen was getting ready for bed when she noticed her right arm looked swollen. "I'd taken yoga that morning and thought maybe I'd held a pose for too long," says the 36-year-old New Yorker, a human resources manager in the fashion industry. "I just figured I'd take an aspirin and see what tomorrow brings." 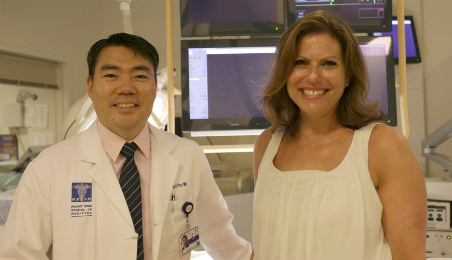 Focused on an upcoming business trip, Cohen went to work the next morning—but as the day wore on she began feeling fatigued and "just not right." When co-workers noticed her arm was swollen and turning blue, they urged her to seek treatment. "So I raced to Mount Sinai," Cohen says. "I'd been there before for a breast cancer scare that thankfully turned out to be nothing, and I'd had such wonderful care that it was worth going the extra 50 blocks to get there now."

By the time Cohen reached the Emergency Room, her arm was three times its normal size. Rushing to identify the problem, the Emergency team did a CT scan and preliminary sonogram. Cohen called her parents, who sent her sister to keep her company and arrived themselves shortly thereafter.

So Cohen's family was present when a nurse came in to say the tests indicated a blood clot near her right shoulder that could travel to an artery. After consultation with her primary care physician, Cohen was given an injection of the anticoagulant Lovenox. While her doctors initially planned to treat her medically, a team of vascular specialists was consulted and deemed Cohen to be a candidate for a procedure that could break up the clot and restore circulation. When Cohen agreed the procedure sounded like the best plan, she was placed in the care of interventional radiologist Edward Kim, MD, who prepared to perform it the same day. "I was nervous because nothing like this had happened before," says Cohen, who wondered if she might lose her arm. "But Dr. Kim talked about things like running in Central Park and really kept me calm."

The procedure, called Thrombolysis, lasted five hours and entailed catheter directed medication to break up the clot, followed by balloon angioplasty. After its successful completion, Cohen spent the night in the hospital and returned home Saturday with the plan of continuing medical therapy. She would do daily injections of antiocoagulation for several months, at which point she would visit with Dr. Kim to determine if the therapy should be continued.

"And here's how kind Dr. Kim is," Cohen adds. She explains that Lovenox was initially chosen as the best treatment for her, but her insurance company declined it and offered an alternative medication. Dr. Kim informed Cohen of this situation and that a switch may have to be made. "Well," says Cohen. "A week later Dr. Kim called me and said that he really thought Lovenox was the better fit for me, so he called the insurance company and fought for me to be able to stay on it for the duration of the treatment! He really went above and beyond and I will never, ever forget that."

On the Right Track

As of spring 2013, Cohen continues to be monitored by her Mount Sinai team, but is doing well and suffers no lasting effects from her episode. "My arm is just fine—it's as if nothing ever happened," she says, adding she feels grateful for the team who got her to this point. "You never want to have surgery, but it was the best way to have it. Before, during, and after my procedure, my doctors explained everything and encouraged me to ask questions. I was grateful to be in such good hands, and overall it was an amazing experience. Dr. Kim and his team saved my life."