I lost my voice in August of 2015, but not from straining it. I fell in my New Jersey home and broke my neck, and subsequently underwent surgery. During the surgery, an anesthesiologist went down my throat with the tube and I almost died after he damaged my voice box. The physician who was in the room saved my life, as I had turned navy blue from a lack of oxygen and he was able to perform a tracheostomy (surgically cut hole in my throat) and repair it. 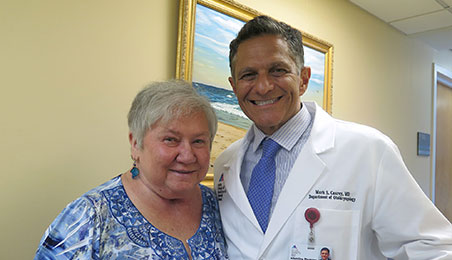 After surgery, I was not able to speak. I couldn't even speak when I went to see ear, nose and throat physician Dr. Jared Wasserman in NJ; I had to write everything down. He examined my throat, and said he was not able to help. However, he recommended I go to The Mount Sinai Hospital.

In December we made an appointment with Dr. Mark Courey, Chief of the Division of Laryngology and Director of the Grabscheid Voice and Swallowing Center of Mount Sinai, and right away I liked him very much. He was an angel sent by God. I think he liked me and my husband right away too.

Dr. Courey scoped my throat and said I would need surgery. He didn’t promise that I would be 100% better, but said that I did need surgery. On March 3, 2016, he operated on me; it was a six-hour surgery. He cleaned up my vocal cord and I remained in the hospital for five days. As soon as I was out of surgery, I started to speak. I didn’t have to write down everything and was so, so happy!

“When Anna came to see me, she had a complicated multilevel airway stenosis (narrowing), involving her larynx subglottis (lower part of the larynx) and trachea,” notes Dr. Courey. “There was complete stenosis in the area of her subglottis.  We endoscopically opened the larynx and subglottis, preserving as much of the posterior mucosa as possible, and then performed a tracheal resection and advanced tracheal mucosa into her posterior glottis, while creating a new tracheotomy with skin flap rotation.  When her posterior glottis and subglottis had healed, we were able to remove her tracheotomy appliance.”

Dr. Courey said my voice was not going to be the same – I had a beautiful voice – I sang in church, but I didn’t care because I could speak again. I went every 2-3 weeks for follow-up appointments with Dr. Courey, who was attentively checking on me. On May 19th, I went back to Dr. Courey. I was already several months not sleeping and had a problem with the ventilator machine from the tracheostomy. Dr. Courey came down and took it off me and I was free. He held my hand as I went upstairs where I stayed for a few hours. He then said, “You can go home! Everything is going to be alright.”

Nothing happened that night, but I was not able to sleep – I was worried. Can you imagine how many months I had to go through writing everything down before my operation with Dr. Courey? I am so happy I found this doctor. He is unbelievable!

Healed Voice, No Ventilator and Speaking to Family Again

In June, I headed back to Mount Sinai, and Dr. Courey said he was surprised I was healed in three months. I still have a small hole in my neck and if I talk too much I have to assist my voice with my stomach. But I have no machine and am very happy.

Every day I think about Dr. Courey – he is a godsend! Nobody in New Jersey knew how to correct my voice; only he did! He is incredible and is always smiling and calls me to follow up.  I would recommend him to everybody. In fact, I have already recommended two friends to see him. And everyone at Mount Sinai was very, very nice.

This is my story – and it is a happy story. As long as I am alive and can speak to my husband and grandchildren, I am very happy!