Durk Snowden had almost given up hope until he learned about a new drug therapy that was offered at Mount Sinai. 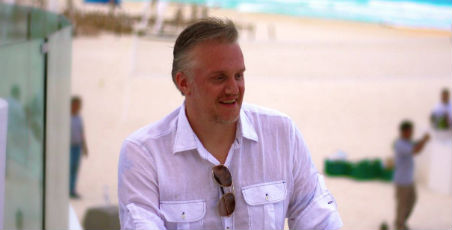 "My journey with hepatitis C started about 25 years ago when I was diagnosed. I was living in New Jersey. I was one of the first patients to go through the combination therapy of interferon and ribavirin. This proved unsuccessful. My doctor at the time gave me no hope. He told me to ‘go ahead and live my life’ and ‘hope for something better to come along.’ I did just that! I Iived, loved and went through life without properly caring for myself. I saw my general practitioner every year. We watched my viral load and liver function steadily worsen.

By January 2011, I began to feel not myself. I knew that my liver was the cause and found an amazing doctor who took the preliminary steps with blood work. We had discussed my hepatitis C, and he suggested Dr. Douglas Dieterich at Mount Sinai. I made an appointment and went to his office with much trepidation that I was at the end of my journey.

I met with Dr. Dieterich and his staff. It was the most efficient and well-run office I had ever been to. When Dr. Dieterich walked into the room, the first words out of his mouth were ‘we can fix this.’ He did blood work and took a fibroscan and the readings were extremely alarming. We discussed the next steps. I began to see Dr. Dieterich monthly as we awaited FDA approval of the triple drug therapy. With his and nurse practitioner Michel Ng’s careful guidance, I began to prepare my body for the battle that was coming – through lifestyle changes and yoga, which the doctor encouraged. I lost about 30 pounds.

In the beginning of June 2011, I began a triple therapy for 48 weeks. What I thought I was prepared for mentally/physically, I certainly was not. The treatment was harsh and difficult. I needed support. I certainly got it. Not once did a phone call not get answered or returned; not once did an email not get answered from either Dr. Dieterich or one of his team. They cared for me through this treatment like a member of the family. The positive treatment and motivation I received made my treatment easier. I believe that in the long run, this added to my chances of being cured.

After my three week blood test, I was showing no sign of hepatitis C. Was it a miracle? After the 48 weeks of treatment, I was elated that the virus was still undetectable. Three months following the treatment, I had sustained viral response. My journey on a new life began. Without the superior care and ability of Dr. Dieterich and the entire team at Mount Sinai, I would not be the healthy person am today.

I will never be able to pay back what Dr. Dieterich’s team did for me. They gave me my life back. They did so with professionalism, grace and care. Thank you Mount Sinai."

Recent news from Center for Transgender Medicine and Surgery