An unexpected diagnosis of hepatitis C brings a patient to Mount Sinai for treatment.

“My name is Nick, and I am now 54 years old.  So I am a baby boomer.  Now, when I came of age, it was the age of the Ramones, disco and all kinds of wild behavior.  Enough said for you baby boomers out there. 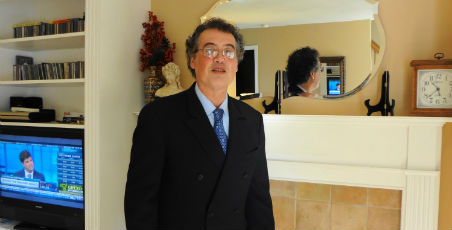 I was first told that my liver enzymes were elevated 25 years ago.  At that time no one really knew about hepatitis C.  I just remember the doctor saying something about high liver enzymes.  I thought to myself, ‘If you lived like me, your liver enzymes would be high too.’  I thought that I had no symptoms, but looking back, I realize that being tired all the time, perhaps my bad moods were symptoms.  After treatment, my wife stated ‘the whites of your eyes were never whiter.’

Here’s how I was diagnosed:  I worked for the federal government and took part in a blood drive.  I remember the nurse saying to the guy next to me, ‘Honey, as long as you don’t hear from us, everything is OK.’   Well, I got a letter from the health department that strongly recommended that I run to the nearest health professional and get treated for hepatitis C.  The first doctor I saw was the type that was rolling his eyes at me and did not seem to understand that although he may have answered the same question several times today already, it was new to me.  I was scared of the side effects of treatment and needed to understand what was going to happen.  I think that he was the type that thought that people who got hepatitis C brought it on themselves.  He wanted a better class of clientele, whatever that means.

I was very lucky when I was told about Dr. Douglas Dieterich and his team at Mount Sinai.  From the very first meeting, I was treated with respect and all my questions were answered.  I was given all of the time that I needed.  Once I started treatment, I was always able to contact someone—whether in person, by phone or email (with hepatitis C treatment, things always come up).

I was lucky that I had hepatitis C geno type 3; that meant 24 weeks of treatment and a very good cure rate.  Dr. Dieterich told me I would be foolish not to go forward.  I think it is great today with all the new treatments available, and treatment times seem to be getting shorter.  Dr. Dieterich and his staff strive to give patients the support that they need.

When I was new, he had patients speak to me about what to expect, and to assure me that it would be OK.  When the time came, he asked me to speak to new patients.  One example of things that come up:  I was told from the onset I would need to take SRI/antidepressants, as Interferon steals your serotonin.  But I did not like the idea.  Well, after freaking out and over reacting over the dog barking, I called the office and told the nurse practitioner I could no longer continue treatment.  She told me to drop the dog and get to the drug store.  I don’t know what she told the pharmacist, but he handed me a pill while he filled the prescription.

Like I said, they were always there when needed.  I was lucky to have a job, wife and dog willing to put up with me during treatment, as it can be hard at times.  But now I have been cured for more than seven years and I feel better and have more energy at 54 than I ever did before.  I know some peopled that have untreated hepatitis C and, to tell the truth, I look and feel better than all of them.  Like I have heard Dr. Dieterich say, “It’s a good time to have hepatitis C.”