They Promised Me a Cure and Delivered

Diagnosed with hypoglycemia, Rosemary McGinn, now 53, traveled through her daily life with an arsenal of snacks, juices, and candy for the frequent and unpredictable moments when her blood sugar would drop below 20

"When my sugar would suddenly crash, it was like I was drunk," explained Rosemary. "I would become very combative, not knowing what I was saying and swaying back and forth. It was scary." 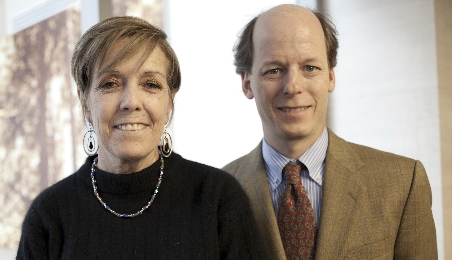 Two years and twenty pounds later, Rosemary was referred to Dr. Ronald Tamler at The Mount Sinai Medical Center by Dr. Jonathan Schlosser of Rockland Endocrine & Diabetes Services in Suffern, New York. In November 2012, Dr. Tamler, Clinical Director of the Mount Sinai Diabetes Center and an Associate Professor of Medicine in the Division of Diabetes, Endocrinology and Bone Disease, met with Rosemary and promised her a cure.

After running a few tests Dr. Tamler diagnosed her with an insulinoma, a rare tumor of the pancreas that keeps making insulin, thus driving blood sugar too low.

"From that point on I felt like everyone at Mount Sinai was working as a team to take care of me. I didn't have to worry about anything and I felt very confident I was in the best possible hands," said Rosemary.

Rosemary's surgery was scheduled in January 2013. Admitted overnight, she was put on a sugar IV infusion to prevent her blood sugar from dropping dangerously low.

Dr. Christopher DiMaio, Director of Therapeutic Endoscopy, performed an endoscopic ultrasound to locate the tumor and Dr. William B Inabnet III, Chief of Metabolic, Endocrine and Minimally Invasive Surgery, performed a laparoscopic operation to safely enucleate (remove) it, a surgery which took less than 90 minutes. Rosemary was cured and discharged three days later.

"Dr. DiMaio and Dr. Inabnet are my surgical saviors. I was in the hospital for a few days before surgery and they stopped by at least twice a day and kept me informed the whole time," said Rosemary. "And now I'm back to living my normal life. Mount Sinai promised me a cure – and they delivered."

Mount Sinai's team approach didn't stop at treating Rosemary. Prior to her surgery Dr. Tamler and Dr. Inabnet notified colleagues of the insulinoma, which has massive research potential. Immediately following the surgery, Rosemary's tumor was frozen and will be analyzed to determine the biological mechanism that produces insulin, possibly leading to treatments for diabetes.

"Insulinomas are relatively rare. So to get a call from the OR – and even be notified prior to surgery – of a research opportunity like this – really demonstrates the unique spirit of collaborative and translational medicine at Mount Sinai," said Dr. Andrew Stewart, the newly recruited Director of the Metabolism Institute and a renowned pancreas expert. "The team went from clinically curing one patient to seamlessly transferring the information to the researchers who may be able to develop treatments to help countless others."

Rosemary's tumor will also become part of Mount Sinai's "BioBank", a database of blood samples and health information to be used for present and future research projects. Once a collection of similar tumors are collected, the Institute for Genomics and Multiscale Biology, led by Dr. Eric Schadt, can perform genetic sequencing on the tumor, leading to more potential research breakthroughs in the future.