Doris Holloway's skin cancer returned after her initial diagnosis 20 years ago. Dr. Hooman Khorasani was able to treat her with Mohs surgery and a paramedian forehead flap reconstruction. 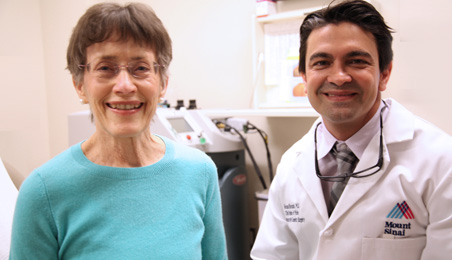 On July 5, 2012, I received a call from my dermatologist telling me that a biopsy on my nose had come back indicating squamous cell cancer. Twenty years ago, I had cancer in the same place on my nose and Mohs surgery was performed. It was scary but not terribly invasive and since I had no visible symptoms of the current cancer, I figured the Mohs procedure would be relatively simple with a couple of swipes. Nevertheless, I decided to look at all options relative to who would be the best person to do the job.

How does one ever know if you’ve found the right doctor? Well I am one of the lucky ones; I did. I found Hooman Khorasani, MD and I want to share my experience with others who may be in the same situation I was in. Dr. Khorasani is the Chief of Mohs and Reconstructive Surgery at Mount Sinai and I was able to get an appointment with him relatively quickly. The Mohs surgery was scheduled for July 17; it was not the simple procedure I had hoped for. The surgery began at 9:45 a.m. and was completed at 5:45 p.m., after the sixth biopsy had finally indicated clean margins. Never once during this long day did Dr. Khorasani ever indicate anything but total confidence that we were going to get this thing and then make my nose ok, in spite of what I knew was becoming a larger and larger cavity. He gently soothed me with his words, with his comforting pats on my head and his assurances that I should not be worried. In fact, after the fourth biopsy around 4:00 p.m., as I was wondering just how much more they were going to have to take off and out of my nose, he brought his lunch out and sat down with me to explain the next situation we were going to deal with, that of reconstruction via the Paramedian Forehead Flap.

Dr. Khorasani was exhausted after a full day of surgery and yet he came out and sat with me one of many patients – to try to give me courage and to make me feel better. How many doctors do that these days? And by the way, his explanation of the next steps did indeed give me the strength to get through the process because he gave me hope. The first phase of reconstruction began on July 25. Lots of lidocaine shots, preventive pain meds, a little valium and we were ready to go. All through the surgery, I felt his expert hands performing what needed to be done. At one point I knew that he was carefully taking measurements of what I imagined must be the hole in my nose and of how much skin he needed to cover it. I must tell you that at no point was I frightened or worried that I was going to be botched. The man is simply a genius.

The first night I started to bleed more than I figured I should be bleeding. Dr. Khorasani told me to apply pressure to the bleeding area until it had stopped and indicated that I should come in the next morning to be repacked. Two days later, I took the pressure bandage off and with it came what seemed to be a critical bandage covering the newly redone flap. Being very frightened, I took pictures, emailed him and waited. He called (on a Saturday) and told me not to be concerned, but suggested that I come in on Monday morning where he reassured me that everything was fine.

The first sutures came out on August 1 and on August 15, I had more surgery. No valium, no vicodin but plenty of lidocaine and once again we were ready to proceed. This phase of the reconstruction was the procedure to disconnect the tube of skin from my forehead which had been providing a blood supply to the still growing flap on my nose (it kind of looked like a shuttle because it was riding on top of my nose). As Dr. Khorasani was sewing me up, there was total silence and I could tell that he was concentrating on making the repair as perfect as he could. On Wednesday, August 22, the last sutures were removed. We will now wait a few months for my body to heal and then I will receive laser treatment to further reduce the inevitable scarring on my forehead and nose. However – and this is important for anyone who will be having this procedure – if nothing further were done from here on out and I were to live with the scars I have now, I would feel as if I were one of the luckiest people on earth. My decision to choose Dr. Khorasani made a huge difference in my life. Not only is he an outstanding surgeon, he is a vibrant, gentle, reassuring, precise, responsive, and patient man. There are no words to describe how grateful I am to Dr. Khorasani for his magnificent work. As far as I’m concerned, he has performed a miracle.