Heart Failure Can Happen During Pregnancy, Delivery, or Both

When Melinda Constantine, a 33 year old nurse, gave birth to her first child she noticed that while the pregnancy, labor and delivery were all normal her heart rate was very high, and her blood pressure very low. She was diagnosed with peripartum cardiomyopathy—a rare type of heart failure that can happen during pregnancy or right after delivery.

Under the care of Anelechi Anyanwu, MD, and Sean P. Pinney, MD, Melinda underwent surgery to implant an LVAD —a battery-operated, mechanical pump that helps the left ventricle pump blood to the rest of the body.

Melinda Constantine, a 33 year old nurse, gave birth to her first child in 2014. The pregnancy, labor and delivery were all normal until all of the sudden, Melinda was overcome with a feeling of panic. She noticed on the monitor that her heart rate was very high, and her blood pressure very low. Hours of testing later, Melinda felt fine again, and two days later, she and her son went home from the hospital. 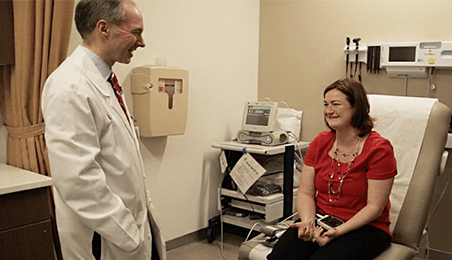 The next day, that pulse-racing feeling overcame her again, along with a bad cough and inability to catch her breath. She brushed it off and took her son for his first pediatrician visit. At the office, a nurse noticed she looked pale, so she checked her vitals and found her heart rate was up and oxygen was low. The pediatrician strongly suggested that she go to the emergency room.  During the visit at the ER, an echocardiogram was performed and revealed that her heart was only functioning at 14 percent.

She was diagnosed with peripartum cardiomyopathy—a rare type of heart failure that can happen during pregnancy or right after delivery. The heart muscle weakens, enlarging the heart and interfering with its pumping function. Melinda’s heart was three times larger than normal, and its left side was failing. She was sent for a cardiac catheterization, put on blood pressure medication, and discharged from the hospital with strict orders to wear a defibrillator vest. A couple months later, a second cardiac catheterization revealed that her heart was even larger, and both sides were failing now. She was then referred to The Mount Sinai Hospital for an LVAD and a transplant.

Under the care of Anelechi Anyanwu, MD, Surgical Director of the Mechanical Circulatory Support and Heart Transplant Program and Sean P. Pinney, MD, Director of Heart Failure and Transplantation at Mount Sinai Heart, Melinda underwent surgery to implant an LVAD (left ventricular assist device)—a battery-operated, mechanical pump that helps the left ventricle pump blood to the rest of the body. Implanted in patients with end-stage heart failure, it is used as a precursor to a heart transplant. Given the long waiting list for organs, the wait could be years—those who are sickest receive priority according to specific tiers. The most in need are in tier 1A, while Melinda is next in line, in tier 1B.

Since getting her LVAD, Melinda’s life has relatively returned to normal, and eight weeks after her surgery, she went back to work full-time. Now she is both hoping for and nervously awaiting the heart that will change her life yet again.

Melinda is extremely grateful for the care she has received and the opportunity to serve as an advocate. She urges pregnant women to not ignore certain symptoms like fatigue, shortness of breath, swelling feet, and a racing heart, and advises them to ask their doctor for a basic metabolic panel test and an echocardiogram, especially if they have a family history of heart disease.