My journey through head and neck cancer began in 2005 when I initially went to the doctor for an earache. At first, after several medical tests, it was believed that I only had a benign lump under my jaw. After a few weeks, I began to have sharp shooting pains and opted to remove whatever it was. Six days after that initial surgery the pathology came back and I was diagnosed with a very rare cancer in my salivary glands….adenoid cystic carcinoma. 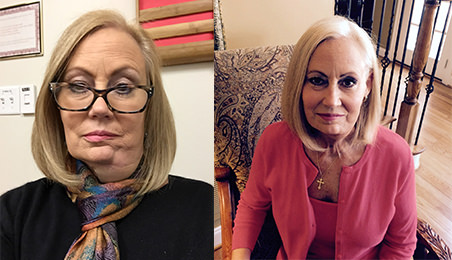 Immediately I knew that I would do anything to live a long and happy life. I underwent another surgery, which was when it was discovered that my cancer had spread. That summer I had radiation and chemotherapy concurrently, and I was “cancer free” for the next 15 months. Two more surgeries followed in 2007 and 2008. I continued to see my surgeon in Florida, where I live, along with my medical oncologist.

In the fall of 2009, several nodules were found in my lungs, so I had two additional surgeries in 2009 and 2010 to remove them. In the spring of 2010, my surgeon told me that my next surgery would leave me “horribly disfigured.” As a flight attendant, I knew that this would end my career - a career I loved. After a couple of hard days, I decided I wanted to see The Great Wall of China, so in October, 2010, my husband, Keith, my brother, Greg, and I took an amazing trip to see the wall.

For the next couple of years I was watched carefully with CT scans and PET scans, and eventually was selected to be a part of a chemotherapy drug trial. Twenty months later, when the drug didn’t work, I was taken off the trial and was devastated. Once again, I picked myself up and made a conscious decision to live a wonderful, happy life. If the drug trial wasn’t my miracle, then I would keep searching until I found one!

In September of 2012, my first great niece was born, and I felt a love like I had never known. A year later, her cousin, my great nephew was born, and then another great nephew in May of last year! With all of these beautiful children, and my husband’s eight grandchildren, I knew that my miracle had to be around the corner. I wanted to see these children grow, go to school, and get married.

Referred from Florida to Mount Sinai in New York

In the summer of 2014, Keith and I began talking about getting a second opinion, but, where?

My cancer is very rare, so, finding the right doctor was critical. We approached my oncologist in Tampa and he referred us to Mount Sinai to see Dr. Marshall Posner, Director of Head and Neck Medical Oncology. What a relief. When we met Dr. Posner, he listened carefully to our concerns, then studied my scans and told us that there were no good chemo drugs for me - something we had already known.

Dr. Posner then introduced us to Dr. Eric Genden, Chairman of the Department of Otolaryngology-Head and Neck Surgery at Mount Sinai….MY MIRACLE!!! Dr. Genden, who is widely recognized for his head and neck cancer and microvascular reconstruction expertise, told us that my jaw was being held together by a large tumor in the bone. He said that he wanted to do surgery right away.

The surgery would be very extensive….in fact, it was nine and a half hours. He not only has the expertise to do the surgery but he instilled peace in Keith and me. He assured me that soon,

I would look just as I had looked before. Dr. Genden also feels that with the primary cancer removed from my jaw, the new nodules in my lungs will be easier to treat! There would be no permanent disfigurement.

I have now had two surgeries….the first took bone from my scapula to replace my diseased jaw and replaced diseased tissue in my mouth and on my neck with tissue from my back. My second surgery refined those areas. There will be at least one more surgery to perfect my jaw, but, already my family and friends are amazed! I look like I did before!

My heartfelt gratitude to the most incredible surgical team ever! Thank you, Dr. Posner and Dr. Genden for giving me my life back so I can live to see my family grow! I still tear up every time I see Dr. Genden….my miracle!