Free of Hepatitis C, Thanks to Mount Sinai

I was diagnosed with hepatitis C in 2000. My diagnosis came as a result of a routine blood test for an insurance policy. I didn't get the insurance, but it probably saved my life. 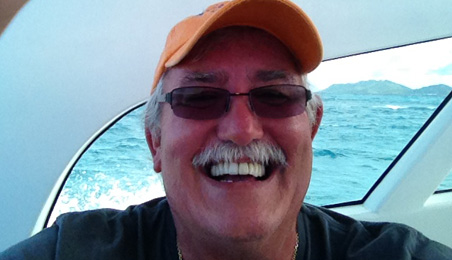 The first hepatologist who treated me was referred to me by a close personal friend of mine who was an orthopedic surgeon. I started my first round of interferon and Ribaviron in September of 2000. The side effects hit several hours after my first injection. It wasn't pretty. Over the next few months, I lost my hair as well as about 50 lbs. After six months, the treatment was switched from interferon to Pegatron. I spent a total of nine months on those two treatments before being pulled for being very anemic as well as non-responding. I subsequently went through a total of six rounds of treatments over the next 12 years before I finally went to Douglas Dieterich, MD.

My Journey to Hepatitis C Clearance at Mount Sinai

I first met Dr. Dieterich in March of 2011. I had been sent to him for a fibroscan. When I called, I was shocked that he answered the phone right away, even though I wasn't a patient. He told me not to panic and just make an appointment with his office.

At that first visit, I met with Dr. Dieterich and his staff including, his Fellow and nurse practitioners. I had never felt as connected with a support team at the previous treatments as I did here at The Mount Sinai Hospital.

Before meeting with Dr. Dieterich, my last failure was with a new triple therapy: Pegatron, Ribaviron and Incivik. Dr. Dieterich was pretty confident that I could be cleared of the virus if I repeated the treatment for 48 weeks instead of the 24 weeks I was on last time.

I didn't expect any side effect surprises as I've been down this road so many times before, but it was very reassuring to know these people were so committed to their patients. There turned out to be a few surprises, but the staff anticipated all of them.

Treatment can be stressful enough, but Dr. Dieterich was completely accessible as were the nurse practitioner Michel Ng and nurse Alyson Harty. The support was truly amazing; they even emailed me to ask how I was doing between visits. In addition, they handled all the medication issues, including fights with the insurance company. Having Alyson staying on top of all that was a Godsend.

Free of Hepatitis C, Thanks to Mount Sinai

I don't think it's a coincidence that this time I was finally cured. It may not take a village, but it certainly takes a team. There is no better team in the tri-state area to deal with liver diseases than The Mount Sinai Hospital.