In June of 2016, I took a major step in resolving a sleeping abnormality that threatened my health, as well as the health of many unsuspecting people. 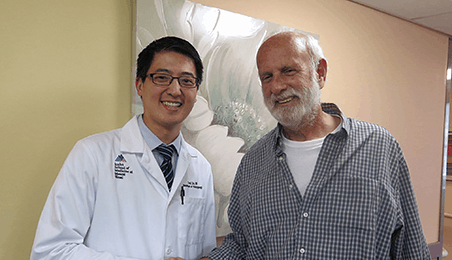 Let me regress…about a year ago, my wife of 43 years told me repeatedly that my sleep was interrupted several times a night by a noticeable change in my breathing and body movements, and sometimes even choking. We live about 70 miles north of New York City, and I proceeded to have a sleep study near our home. This study revealed a significant sleep apnea that needed my prompt attention in seeking a corrective action. Toward that end, I attempted to use a CPAP machine, but I don’t believe I slept one full night with it. I could not adjust to the intrusion it made on my sleep routine, so I decided to pursue another remedy.

I began investigating sleep solutions, and my research led me to The Mount Sinai Hospital and Dr. Fred Lin of the Department of Ear, Nose and Throat – Head and Neck Surgery. Not only did he seem to have the expertise I was seeking, but my decision was swayed by a powerful personal preference. You see, I met my wife, Rotha, at Mount Sinai some 45 years ago. We worked together in the Blood Bank, located in the Klingerstein Clinical Center Building on Madison Avenue. We both are now retired, but most definitely, have specially places in our hearts and souls for The Mount Sinai Hospital.

Dr. Lin performed a sleep endoscopy and it revealed a condition whereby my tongue collapses during sleep, leaving only a small passageway for breathing. I was told of the potential for a corrective action, called a hypoglossal stimulator implant, formally known as the Inspire Therapy implant. He said that among the surgical options, this had the highest probability of a successful and lasting outcome. Fortunately, I was eligible for this procedure and had it performed by Dr. Lin and his staff June 14.

In August, I went for the titration – an in-lab sleep study to measure continuous positive airway pressure - and I was absent of any sleep apnea, per the results. The implant was then activated and I was given instructions for the remote that sets the corrective actions in motion on a nightly basis.

Since then, the Inspire implant has been a routine ritual part of my life and I’m going great! My wife says she can’t hear anything at night. My snoring has ceased since the implant and I’m feeling very energetic. Dr. Lin is excellent – he’s really good – and he explained everything to me and the follow-up care has been great. ;

If you (or someone you love) are unable to commit to the CPAP routine, the Inspire Therapy implant seems to be the most state-or the art workable alternative. The procedure is pretty straightforward and individuals who suffer from obstructive sleep apnea should consider this if they cannot comply with CPAP or if their lifestyle doesn’t accommodate it.

Thank you, Dr. Lin and your staff at The Mount Sinai Hospital. I have truly benefitted from the progress Mount Sinai has made since I first walked thorough their door a short 45 years ago. I could not be more proud than to have been a part of the wonderful Mount Sinai tradition of excellence in the medical field. I’m happy I did this surgery and it’s working well.