A nurse practitioner for several years, Karen Andolino knew something was amiss when a stubborn tongue lesion persisted. Believe it or not, she sought nine consultations – all of which resulted in misdiagnoses. However, a trip to the dentist yielded her an answer after he took a biopsy. 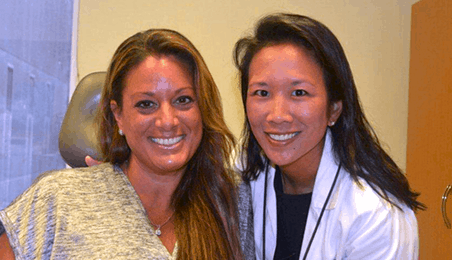 “It was diagnosed as a cancer that doesn’t typically present in the mouth – malignant fibrous histiocytoma (formerly known as fibrosarcoma),” Karen recalls. “It’s an aggressive type of sarcoma typically associated with a poor prognosis.”

“My colleague recommended that I see Dr. Marita Teng at the Head and Neck Institute at The Mount Sinai Hospital. He said she and Dr. Eric Genden are top surgeons in the field of head and neck cancers. I then consulted multiple colleagues, and every one of them directed me to Dr. Genden and Dr. Teng, noting they are the best.”

Karen was seen by Dr. Teng within a day and a half of her call. “From the time I walked into the appointment, she was very positive. She knew exactly how to deal with the situation and didn’t scare me the way other facilities did prior to coming to Mount Sinai. Dr. Teng said she was very confident she could remove it, and she was direct and very honest, as well as extremely kind and compassionate. Some surgeons can have an air of arrogance, but she was so kind, professional, and empathetic – she is truly what a surgeon should be – very caring.”

Karen underwent surgery in June 2011, combining a partial glossectomy, a selective lymph node dissection, and a tonsillectomy all at once. In fact, Dr. Teng removed 19 lymph nodes from Karen’s neck before the surgery was finished. It turned out the cancer was a sarcomatoid version of the most common type of oral cancer, squamous cell carcinoma.  “I was only in the hospital for two days. I don’t know how Dr. Teng did it, but she did. And all night a resident was checking in on me, and he was so nice. I couldn’t talk, so I would just give him the thumbs-up when he walked in.”

Because her surgery was extensive, Karen should have been out for about six weeks. However, she was able to return to work - full duty - in three weeks. Prior to coming to Mount Sinai, other physicians told Karen she was going to have a feeding tube, and possibly open jaw surgery. “Dr. Teng told me this was the worst case scenario, and although it was possible, it was highly unlikely.” No feeding tube was necessary and neither was open jaw surgery. “I started on liquids after the surgery, then I was eating soft foods for a while, and then I was fine.”

Grateful She Found Dr. Teng and The Mount Sinai Hospital

“Dr. Teng saved my life,” Karen declares. “If I didn’t have the surgery with her, it probably would have spread. This type of cancer has a high recurrence rate. She ensured all the margins were clean before she finished surgery. She is awesome - every year on June 1, I write an email to thank her on the anniversary of my surgery.”

“The entire team - from the medical assistants to Dr. Teng – was excellent. I never had a question because it was always answered before I asked. They were phenomenal about emails and phone calls – I had a very quick response.”

“Dr. Teng is the epitome of what every surgeon should be! Her bedside manner, compassion, and skills are unsurpassed. I’ve even recommended someone else to her. She has hands of God – she gave me a second life!”