From Tonsil Cancer to Cancer Free: A Journey of Enlightenment

In April 2016, I had a few Pixy Stix for a snack and for the first time it burned when it went down my throat. I went to my primary care physician (PCP), who took a swab for strep throat, which came back negative. In October, I was eating a few different kinds of foods that also burned my throat, so I returned to my PCP, who referred me to ear, nose and throat physician, Dr. William Portnoy. 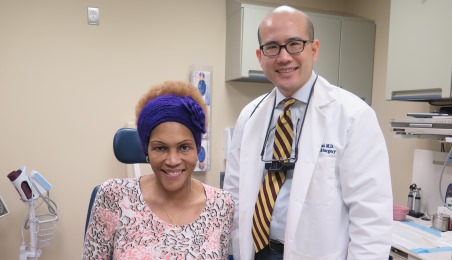 He looked in my throat and proceeded to do a biopsy. Just after Thanksgiving, my biopsy results came back and he relayed to me the bad news that I had HPV-related tonsil cancer. That’s when the floor just seemed to drop right out from underneath me. I literally sat on my bed and started planning my funeral. I was also wondering how I was going to tell everyone. I told a best friend of mine, which was a saving grace.

From Dr. Portnoy I was referred to head and neck surgeon at Mount Sinai Beth Israel, Dr. Raymond Chai, who examined me, scheduled a PET scan and then conducted an exploratory procedure in the operating room to determine if I was a potential candidate for robotic surgery. I shielded my parents from the news, but told them that I had a procedure on my tonsils. It was a half-truth, but I wanted to protect them.

After the exploratory procedure, I had a follow-up appointment and Dr. Chai relayed to me that it was a large mass on my tonsils and palate. He told me that I was a good candidate for transoral robotic surgery (TORS). He also told me he would need to do a neck dissection to remove potential cancerous lymph nodes. I was able to make light of the robot surgery, and asked him if it was laser or if he just scooped them out like ice cream. But I then learned that the robot was comprised of two arms holding tiny instruments that went down my throat – and I didn’t need any external incisions to remove the throat cancer.

A few weeks later – after getting pre-clearance tests – I went in for surgery. From the time I checked into Mount Sinai Beth Israel through the surgery, everyone took really good care of me and made me feel relaxed. I had a lot of anxiety and I was pretty naïve about the process. They had a patient advocate named Fawn and a great anesthesiologist, and of course Dr. Chai checked on me before surgery. He has a very calming bedside manner, which is a 10-plus!

The surgery was January 27, 2017, and it was a Friday and I returned home on Monday. Dr. Chai said that was his goal date to get me out and get me back to my own bed. I needed to return to caretaker mode for my parents, but I tried to take it as easy as possible and used a mouth rinse to rid any bacteria that could have built up.

Successful Robot Surgery with No Chemotherapy or Radiation Follow-Up

I had a lot of yogurt and soups, and I finally just at franks and beans. My food boundaries are lifting and I can finally eat what I want to eat now. Even better, I was told that the surgery was so successful, I will not require chemotherapy or radiation as a follow-up treatment.

I thank God for all three of my doctors, my PCP, Dr. Portnoy and Dr. Chai – they are God sends! This was a journey of enlightenment and I don’t take any more days for granted. I live each day to the fullest now. Thank you to my physicians and the whole entire staff at Mount Sinai Beth Israel – they were wonderful and I am grateful to be alive to tell my story!