Upon discovering a lump on his neck, Christian Burian headed to his local Ear, Nose and Throat doctor. After undergoing a CT scan and biopsy, his physician confirmed he had oral cancer and recommended he see a head and neck robotic surgeon. 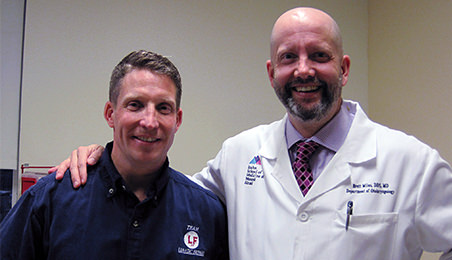 “He suggested surgery first, versus chemotherapy, because surgery offered less long-term negative side effects such as potential damage to the salivary gland and recurring cancer risks,” Mr. Burian explains. “From there, I placed the ball in my court and moved the process along with Mount Sinai’s Department of Otolaryngology-Head and Neck Surgery, reputable for its physicians’ robotic expertise.”

“Dr. Brett Miles’  resume spills off the page. You get the impression he is super confident yet supremely personable and easy to communicate with. I did some research on hospital rankings and Mount Sinai’s Department of Otolaryngology-Head and Neck Surgery ranks 10th in the nation for Ear, Nose and Throat surgery, and the fact that he was the one selected to helm this trial boded very well. I was lucky to be only a short train and subway ride way from the best hospital in the country for my condition.”

“My first visit was January 5, 2015 and over the next two weeks, I had CT and PET scans done, met with Dr. Miles, Co-Chief of the Division of Head and Neck Oncology at Mount Sinai, Dr. Marshall Posner from Medical Oncology and Dr. Vishal Gupta from Radiation Oncology. They concurred my first course of action should be surgery.”

About the Advaxis Clinical Trial and What to Expect

During the first meeting, Dr. Miles determined Mr. Burian was a candidate for the Window of Opportunity (Advaxis) clinical trial, as the biopsy confirmed it was the HPV-strain of oral cancer. “The team at Mount Sinai jumped through hoops to ensure I didn’t skip a beat of this process. The trial requires four weeks of the vaccine and robotic surgery to follow. So, the first hope I had for surgery was February 20th. It was a four-week process and they really worked hard to accommodate my busy schedule and minimize my anxiety.”

Mr. Burian experienced a few aches and chills after the vaccine, but a few aspirin cleared them. Then came the surgery. “The whole surgery took place in four hours,” Mr. Burian describes. “I checked in around 6 a.m., they began at 8 a.m. and I was out by noon. By that evening, I was up and walking laps in the hospital. By Sunday, I had done seven miles in laps and was ready to go home. They said to plan for a week’s stay at the hospital, but I was discharged in two days back to a limited work schedule on Monday”.

Prior to surgery, Mr. Burian says, “I had the benefit of early detection, coupled with the Advaxis vaccine, which will hopefully provide some long term immune benefit.”

A critical component of Mr. Burian’s positive experience was that he did his homework and recommends others do as well. “You talk to people you know, and they recommend hospitals, but some don’t even offer robotic surgery. For my age and physical state, I felt I was a strong candidate for Mount Sinai and after further exploration, I made my decision to move forward with this team. When I met Dr. Miles, I was immediately impressed and from the moment I called the Department and spoke with his team, I was immediately treated as a person with a name and was extremely welcomed. The response time for follow-up phone calls was impressively quick.”

“I can’t say enough great things about the entire staff and care at Mount Sinai. The nurses watched over me at all times while recovering and the entire care team was exceptional. The Mount Sinai Hospital is full of wonderful people, and I’m grateful to have been treated there.”