It Feels Good to Feel Good

Michael Wilson is the type of man that won’t let anything slow him down. As an engineer who runs his own consulting firm that specializes in healthcare and clean energy, Michael definitely encapsulates both his areas of expertise. An active skier, cyclist, and traveler he is always on the move, living clean and eating healthy. 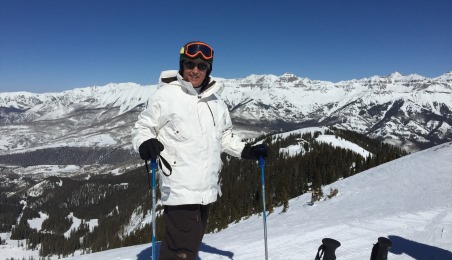 But Michael spends his time developing solutions for the healthcare problems of others, not for himself. And so when, in 2011, he began finding himself frequently needing to urinate something his internist brushed off, whenever Michael mentioned it, he found himself as his own consultant, using his analytical mindset to lay out a plan of action find a solution.

“It became a running joke amongst my Life Partner Debra, my friends and I,” Michael said with a chuckle. “I began to request aisle seats whenever we went to the theatre or to a concert so that I could dash to the restroom when I needed. On the slopes my friends knew that I planned my ski runs off the marked trail when I needed to relieve myself. I even reduced my liquid intake.”

These are just a few of the many ways Michael managed his condition but his list of symptoms kept growing and becoming more pronounced. His urgency to urinate was more frequent than ever and was now accompanied by pain and a weakened flow. He was still without a definitive solution.

In February of 2016, after years of trying to handle his issue on his own, it was Debra’s mother, who Michael calls his Madre, who proved to be his impetus for change and catalyst to find another solution.

As an active member of Mount Sinai’s Health Information Community, she knew exactly who could solve Michael’s problem and provide a solution:

Michael felt very comfortable with Dr. Motola’s systematic and methodical approach to diagnosis. Dr. Motola listened to everything that Michael had to say, ran all standard and specialized tests pertaining to Michael’s symptoms and he was able to come to a definitive diagnosis and treatment.

Michael had BPH (Benign Prostatic Hyperplasia), a very common and treatable condition found in 50% of men by the time they are 60 years old. BPH occurs when excess tissue builds up in the prostate causing a man to suffer from all all the symptoms that Michael was experiencing – urgency to urinate, weak flow and pain after urination.

Dr. Motola, a BPH specialist, recommended that Michael undergo Rezūm, a highly effective, minimally invasive outpatient procedure that delivers radiofrequency generated thermal therapy, in the form of water vapor, directly to the prostate killing the extra tissue that causes the pressure on the urethra.

In April 2016 Dr. Motola treated Michael with Rezūm. The procedure took about 20 minutes and after two weeks Michael began to feel Rezūm’s effects. A month after the procedure Michael says he noticed a big difference. His pain was gone, his frequency decreased and his flow increased. Even his friends noticed!

"Patients with BPH are very fortunate to now have several minimally invasive treatment options that can be performed in a matter of minutes in the office.” Dr. Motola explains. “Shortly after these procedures are completed patients are able to resume a normal voiding pattern that no longer limits their sleep patterns or interferes with their lifestyle, eliminating their need to use lifelong medications. Patients are always amazed with how easy it is to go to through these procedures and how spectacular the results are."

“Don’t wait as long as I did,” Michael advises, “That’s the biggest lesson I learned from this experience. There’s no reason.”

When asked how he’s doing now. His answer is one all doctors want to hear from their patients:

“It feels good to feel good!”