Diagnosed with a rare blood disease, Jenna was in line for a lung transplant—until our innovative treatment proved a success

Jenna, age 16, was diagnosed with granulomatosis with polyangiitis at the age of 13. Her disease attacked her skin, joints, sinuses, and eventually her respiratory track. The tubes bringing air into her lungs were rapidly closing. Despite aggressive chemotherapy and several procedures, her airway disease rapidly progressed. Her local doctors in Riverdale and Hackensack, New Jersey, diagnosed her and provided Jenna with high quality care, they had reached the limit of what they could offer. Increasingly concerned that Jenna’s airway might completely close, they prepared the family for lung transplantation. However, they also sought out doctors who might be able to provide alternate treatment options. 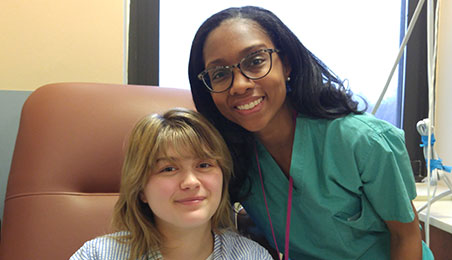 They referred Jenna to Alfin Vicencio, MD at the Mount Sinai Kravis Children’s Hospital, a pioneer of interventional flexible bronchoscopy techniques in children. The doctors believed he was one of the few doctors in the country who might have a solution.

Dr. Vicencio, together with his colleague Chantal Spencer, MD, explained that Jenna’s condition was difficult to manage and that since medical therapy had failed, the best chance was a high-risk surgery to re-open the airway. They also informed the family that, given the nature of her disease, there was a high likelihood of recurrence, and Jenna might require repeated complex procedures to keep the airway open.

Flexible bronchoscopy, a commonly performed procedure during which a flexible camera is inserted into the airways and lungs through the mouth, was performed by Dr. Vicencio and Dr. Spencer to characterize the extent of disease, and to help plan a more definitive solution. During the initial procedure, they realized that Jenna’s disease was more severe than expected. They decided to use a combination of techniques to open the airway, including electrocautery, balloon dilation, and cryotherapy. Although cryotherapy–freezing affected portions of the airway to cause involution of obstructing lesions–has been used by surgeons for years, doctors rarely use it to treat Jenna’s condition.

To the delight of Jenna, her family and her doctors, the initial procedure was a great success. Her airways remained open, and Jenna was able to breathe more easily. Throughout the following year, Jenna underwent additional cryotherapy procedures to identify areas of new disease and treat these areas well before they compromised Jenna’s breathing. Today, Jenna’s lung function is normal, and her most recent bronchoscopy showed no active disease. Most important, she is no longer being considered for lung transplantation.

“We are so thankful to the doctors who thought a little out of the box and basically saved my daughter's lungs,” say Jenna’s parents. “We have no doubt that this is a technique that may save others. Being one of a few doctors in the U.S. capable, and having the equipment to treat children this way, we feel incredibly blessed that they were close enough to us in proximity. They are also two of the kindest doctors to work with.

“Drs. Vicencio and Spencer used their knowledge as pediatric pulmonologists to create a new way to treat an aggressive disease which was destroying my daughter’s lungs. Their compassion towards my family and for their job should be commended.

“We are looking forward to the future rather than one day at a time and the team at Mount Sinai made this possible. Jenna still has to go in for maintenance bronchoscopies but we are hopeful that the time in between is longer and the medications will be reduced. That is everyone’s goal. We are so grateful to them for giving us a daughter who has the use of both her lungs and a brighter future.”

Now, at age 16, Jenna can live like a normal teen, doing everything she could do before she developed the disease.