Fight and Conquer: Vanessa’s Journey of Beating a Brain Tumor

The Oxford Dictionary defines ''care'' as:
The provision of what is necessary for the health, welfare, maintenance, and protection of someone or something.

Headaches, fatigue, and confusion are common symptoms of polycystic ovarian syndrome (PCOS), as well as a lack of sleep - both of which I've suffered from for years. So, I had felt poorly for quite some time and when a headache would occur I didn't really think anything of it. I'd grab an extra cup...or two of coffee, pop some aspirin and go about my day. But when I began experiencing spasm-like headaches in January 2014, I had the thought that maybe what I’d come to expect as a “normal” behavior of health, wasn’t actually so normal after all. I didn’t know how one little thought would lead me on an unexpected journey. 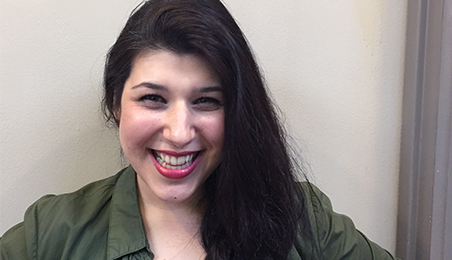 It started with seeing my primary care doctor. I explained my symptoms and she came up with a loose diagnosis of “ice pick headaches.” I researched the info and it seemed pretty plausible. She prescribed a medication that had worked on prior patients and sent me on my way. After a week, I still felt the same way: awful. By her own admission she said that this really was out of the realm of her expertise and recommended a neurologist, Dr. Kyusang Lee of Mount Sinai Beth Israel.

Dr. Lee was very helpful in assessing my symptoms in a kind and conciliatory manner. I really appreciated the fact he didn’t rush me out of the room and took the time to listen to my concerns, of which there were many. After a standard, neurological exam and chat about my family history, Dr. Lee agreed with my primary care physician’s diagnosis, but being the thorough doctor he is, he sent me in for an MRI of the brain.

To his and my surprise, I was officially diagnosed with a benign non-secreting pituitary brain tumor on March 10, 2014. Out of all the possible diagnoses I pondered while waiting for my results, a brain tumor never even made my list! After I got over the initial shock, with shock being a gross understatement, I dug deep for some courage and trudged forward. This was not the time to cower and throw myself a large pity party, which I really wanted to do, but I couldn’t, as there was a job to be done. Fight and conquer!

The brain is a vital organ, some would say the most vital organ outside of your heart and I’ve grown quite attached to mine. So, I didn’t want just any neurosurgeon getting acquainted with my brain; I wanted the best. A doctor who’d look at me as a human being first and a patient second; I didn’t want to be seen as an ‘’interesting case’’ or just another number that they could add to their surgery performance list. Dr. Lee recommended a surgeon who fit my requirements and exhibited qualities that touched at my heart—Neurosurgeon Dr. Raj Shrivastava link to a of Mount Sinai’s Skull Base Surgery Center.

I was first introduced to his administrative team, who are lovely. His nursing coordinator, Barbara Oudheusden is efficient and always wears a smile. I could tell by how they spoke about Dr. Shrivastava that they had the upmost respect for him. That first impression I gleaned with the admin team never diminished, but increased when I met Dr. Shrivastava myself. Upon entering, it was his smile and overall peaceful energy that instantly put me at ease. As we discussed the diagnosis, the surgery itself, which was an endoscopic trans-sphenoidal resection of a pituitary tumor, my post-op care and my never ending questions, he was always clear and concise; he spoke with authority about his craft and gained my trust. After all that has transpired since the initial meeting, that trust has never wavered, only deepened and grown.

Surgery was scheduled for April 1st and eleven hours before I was to be on an operating table, I received a call from Dr. Shrivastava’s office informing me that United Health Care had denied me my surgery. The proverbial wind was knocked out of my sails. All of us were shocked, but every single team member worked so fiercely on my behalf to have UHC reverse their erroneous decision. I was so thankful to have amazing people in my corner.

On April 24, 2014, I was finally able to walk into Mount Sinai Roosevelt and begin the prep for surgery. Right before wheeling me into the operating room, Dr. Shrivastava touched base with me and the conversation soothed my soul. The four-hour surgery was a success (as if there was any doubt)! Dr. Shrivastava was able to resect 90 percent of the tumor (the remaining portion was left intentionally as it was very close to the carotid artery), and by that evening I was up and smiling. The entire neurosurgery staffs in the operating room and in the NICU were fantastic. Treated me with a compassion I still haven’t forgotten. It was brain surgery, but because of medical advancements in this field and Dr. Shrivastava’s expert skill, I was able to walk out of the hospital on my own two feet the next day! That blew me away.

Follow up appointments happened with a variety of doctors and I finished out the year on a high note; I felt better than I had in ages and life was looking up. Then flash to March 2015 where the tried and true method of ‘rinse, recycle, and repeat’ happened. Long story short, at my sixth month checkup, my blood tests came back with abnormal findings. They re-tested my tumor and low and behold that tiny, half-a-penny sized residual tumor that remained was secreting growth hormone. What?!?! It actually had been secreting growth hormone the entire time, but it didn’t show up on the original pathology report.

I couldn’t believe I was heading into the breach again, but this time I knew what to expect. Dr. Shrivastava and his team were heading back with me, along with a Mount Sinai ENT/Otolaryngology surgeon, Dr. Satish Govindaraj, who is a consummate professional, no non-sense and genuine man. I couldn’t lose. On March 30th at Mount Sinai Hospital, the stubborn, ‘‘little tumor that could’’ was removed!

Protection: Instructions for Self and Others

I know I won’t be having any more surgeries, but if I did, I would choose Dr. Shrivastava, Dr. Govindaraj and Mount Sinai every time. Mount Sinai is constantly raising the bar of excellence, not only for themselves, but their place within the medical world. Pushing the boundaries of their doctors and nurses’ skill sets, they also find new and innovated ways to care for patients - both pre and post-operatively - outstanding. In addition, having the team of Dr. Shrivastava and Dr. Govindaraj working in concert to achieve a common goal was remarkable. Two different personalities and two different sets of medical expertise came together and melded beautifully in the or to take care of me and complete the job. That’s rare to find, but Mount Sinai delivers where other hospitals do not. I count myself lucky to have been under their watchful eye of care and devotion.

If I can offer a piece of advice, please above all else be your own advocate; listen to your body when you don’t feel well and always express your views. It’s your health and your life. I’ve learned so much over the course of a year. Strength– the upsetting life situations I was always afraid of and thought would strike me down are now the experiences that have and will continue to build me up; Faith--both spiritual and physical, and last, but not least, letting go and placing the ultimate trust – my life - in another human being.

That’s pretty powerful stuff.
Take care and be well.
In the words of William Shakespeare, “I can no other answer make but thanks. And thanks, and ever thanks.”