In 1990, Ruben Brown started to experience a noise-induced hearing loss. “It was very noisy for a while,” the retired 87-year-old describes. “But then all of my hearing just faded away. I worked as a mechanic years ago and it was very noisy. I should have worn ear protection, but didn’t. When the hearing loss occurred, I tried over-the-counter hearing aids, which did not work. I was going through two batteries a day, and still could not hear properly.” 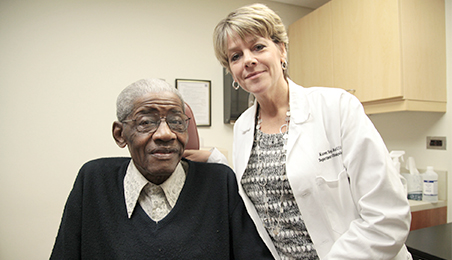 Later, Ruben consulted his primary care physician, explaining he reached a point where he didn’t understand when people were speaking to him. She said, “I think I know someone who can help you.”

When his doctor mentioned Karen Siegel, AuD, CCC-A, FAAA, was at the Center for Hearing and Balance at Mount Sinai, he was pleased. “I had been to Mount Sinai before visiting with my friends, and I noticed the concerns of the employees here and how very helpful they are. They had always made me feel very comfortable, even as a friend of sick patients.”

“When I first came to see Karen, she did an evaluation and recommended I speak to Dr. Eric Smouha.” At the time of his evaluation, Ruben was fully deaf; more specifically, he had profound sensorineural hearing loss bilaterally, meaning complete hearing loss in both ears. “The hearing team discovered I was a candidate for a cochlear implant. Then they collaborated together and decided I needed a cochlear implant.” Ruben then got medical clearance and the surgery.

Just one month later in December 2012, Ruben’s left ear had healed from the surgery and he received his initial activation.

“He could hear environmental sounds right from the start,” Karen recalls. “He couldn’t hear most speech, but that was normal and part of the process. He was very positive. By the one week follow-up, he heard some speech and progressed from there. He had not talked on the telephone for years and began speaking on the telephone again.”

“I was skeptical at first,” Ruben admits. “I was wondering what they were going to do, but it was awful, because I couldn’t hear at all. So after they performed the operation it was a miracle that all of a sudden I could hear! It kept getting better and better, and I love it, because it works!”

So when his hearing returned, was his favorite sound the birds chirping, music, or even his wife’s voice? He still smiles when he recalls it. “The first time I was able to hear the doorbell for the pizza guy was really great. It was my favorite sound. Plus I take care of my wife, so communicating with her clearly was critical to her care. Without Karen and Dr. Smouha’s help, I didn’t know what I was doing, but now I can communicate with my wife and even talk on the telephone with my family and friends. In fact, I now hear the telephone ringing better than my wife!”

As for advice to share with others embarking on this hearing journey, Ruben strongly suggests staying positive. “I think very positively and always did. I’m of the mindset that the patients need to help the doctor too. From day one, I said I have to do the work with Karen on my hearing. I did a lot of listening and had someone read to me. I thought if this plan works even just a little bit, I could make it work more and more as time progressed.”

Ruben is now thrilled with his outcome and his quality of life. “I have been successful in communicating because Karen and her staff made it possible! Whatever life brings me I just want to enjoy being part of it.”