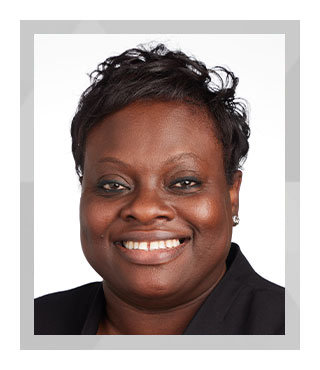 With more than 20 years of experience in nursing, Ms. Richards has improved operational practices across medicine, surgery and critical care.

Ms. Richards joined The Mount Sinai Hospital in 2001 as a clinical nurse on an organ transplant unit, and has consistently championed initiatives to improve patient outcomes across the hospital while advancing the professional development of clinical nurses in her areas of responsibility. Her passion for evidence-based nursing practice coupled with her collaborative leadership style led to her promotion through several leadership roles during the past two decades.

Ms. Richards became an assistant nursing administrator in 2004, and a nurse manager for a medical surgical unit in 2008. Her leadership abilities and her proven track record in nursing operations led to her appointment as associate director of nursing. In 2016, she assumed responsibility for the Wound, Ostomy, and Continence Program, as well as the Gastroenterology medical and surgical specialties.

In 2018, she was promoted to director of nursing, and her role expanded to include the float pool, surgical advanced practice nurses, and nurse administrators. In 2020, she became senior director with responsibility for medicine. Most recently, working collaboratively with key stakeholders she co-developed the Nursing Department Staffing Office. Ms. Richards is considered an expert in labor relations and made a significant impact during the 2019 NYSNA negotiations.

Ms. Richards began her career in 1998 at St. Joseph’s Hospital in Connecticut as a surgical RN. In 1999, she transitioned to home care as a clinical nurse at the Visiting Nurse Service of New York. She received a Master of Science from Pace University in 2005 and will receive her Doctorate of Nursing Practice from William Paterson University in Wayne, New Jersey, in 2022. She completed a fellowship in the New York University Leadership Institute for Black Nurses in 2010. She received the Ellen Fuller Award for Excellence in Nursing in 2012, and is currently enrolled in the Black Executive Acceleration Program.