Mount Sinai experts were the first in the Eastern United States on March 23 to implant a newly FDA-approved device that prevents stroke in patients with arrhythmia. 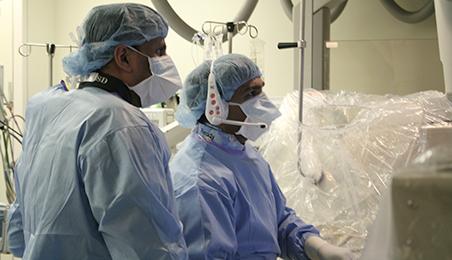 The new device is designed to address atrial fibrillation, a malfunction that throws the heart out of rhythm, causing the upper chambers to beat too quickly. Often seen in aging patients, it interferes with electrical signals that drive the heartbeat. Patients with the condition have a five times greater risk of stroke, and a greater chance of having a more serious stroke.

The WATCHMAN device, the size of a quarter and shaped like a parachute, is implanted into the heart to close off the left-atrial appendage, a blind pouch of heart tissue where blood clots form and can then break off and travel in the blood stream to the brain and cause strokes. The device is inserted into the heart through a vein in the leg during a one-time, minimally invasive, catheter-based procedure in the Electrophysiology Laboratory.

"Blood-thinning medications like warfarin or Coumadin are quite effective in reducing the risk for stroke in patients with atrial fibrillation. However, many of our patients cannot, or will not, tolerate these medications because of the incidence of bleeding. The WATCHMAN device is a solution for such atrial fibrillation patients, since it similarly reduces their stroke risk, but averts their need for a lifetime of blood-thinners," says the electrophysiologist who led the procedure, Vivek Reddy, MD, Director of Arrhythmia Services at The Mount Sinai Hospital and the Mount Sinai Health System.

Dr. Reddy served as co-principal investigator for national clinical trials testing the WATCHMAN device. The recently published results of these trials revealed that the device offers an efficient alternative to warfarin, and prevents strokes just as well. Patients with the device implanted also had a 60 percent reduction in cardiovascular mortality and 34 percent reduction in all-cause mortality.

Warfarin is the most common treatment currently used to reduce stroke risk in patients with atrial fibrillation. However, warfarin is not well-tolerated by all patients and has significant risk for bleeding complications, and patients need to be closely monitored with bi-weekly blood tests.

"This advanced technology will be truly life-changing for many atrial fibrillation patients freeing them from not only the dangers of stroke risk, but also the daily challenges of long-term blood-thinning medication therapy," says Valentin Fuster, MD, PhD, Director of Mount Sinai Heart and Physician-in-Chief of The Mount Sinai Hospital.

The newly U.S. FDA-approved WATCHMAN, made by Boston Scientific, Inc., is approved in more than 70 countries worldwide.

Dr. Reddy has served as a consultant to Boston Scientific, Inc., the manufacturer of the WATCHMAN device.

About the Mount Sinai Health System

The Mount Sinai Health System is New York City's largest academic medical system, encompassing eight hospitals, a leading medical school, and a vast network of ambulatory practices throughout the greater New York region. Mount Sinai advances medicine and health through unrivaled education and translational research and discovery to deliver care that is the safest, highest-quality, most accessible and equitable, and the best value of any health system in the nation. The Health System includes approximately 7,300 primary and specialty care physicians; 13 joint-venture ambulatory surgery centers; more than 415 ambulatory practices throughout the five boroughs of New York City, Westchester, Long Island, and Florida; and more than 30 affiliated community health centers. The Mount Sinai Hospital is ranked on U.S. News & World Report's "Honor Roll" of the top 20 U.S. hospitals and is top in the nation by specialty: No. 1 in Geriatrics and top 20 in Cardiology/Heart Surgery, Diabetes/Endocrinology, Gastroenterology/GI Surgery, Neurology/Neurosurgery, Orthopedics, Pulmonology/Lung Surgery, Rehabilitation, and Urology. New York Eye and Ear Infirmary of Mount Sinai is ranked No. 12 in Ophthalmology. Mount Sinai Kravis Children's Hospital is ranked in U.S. News & World Report’s “Best Children’s Hospitals” among the country’s best in four out of 10 pediatric specialties. The Icahn School of Medicine is one of three medical schools that have earned distinction by multiple indicators: ranked in the top 20 by U.S. News & World Report's "Best Medical Schools," aligned with a U.S. News & World Report "Honor Roll" Hospital, and No. 14 in the nation for National Institutes of Health funding. Newsweek’s “The World’s Best Smart Hospitals” ranks The Mount Sinai Hospital as No. 1 in New York and in the top five globally, and Mount Sinai Morningside in the top 20 globally.