Mount Sinai Kravis Children’s Hospital is the clinical home of Mount Sinai’s Jack and Lucy Clark Department of Pediatrics, and we share a common vision to improve the health of infants, children, adolescents, and young adults through prevention, early detection of disease, and evidence-based treatment, with an emphasis placed on quality and safety of care.

Over the past year, our Department of Pediatrics continued to experience tremendous growth and success in our academic missions of clinical care, research, and education.

In February 2018, a 45-year-old mother of two, whose prenatal ultrasound revealed a suspected heart defect in the fetus, was referred to the Fetal Heart Program at Mount Sinai Kravis Children’s Hospital. She was immediately seen by Rajesh Shenoy, MD, Associate Professor of Pediatrics (Cardiology) at the Icahn School of Medicine at Mount Sinai, who specializes in fetal echocardiography. He diagnosed tetralogy of Fallot with pulmonary atresia.

After close monitoring by the cardiologists and the high-risk obstetric team, a baby girl was born at 39 weeks, weighing a healthy 3.7 kg. A cardiac MRI performed by Santosh Uppu, MD, Associate Professor of Pediatrics (Cardiology), and Radiology, revealed a discontinuous left pulmonary artery (LPA), a rare congenital defect in which the artery to the left lung does not connect in the usual fashion to the main pulmonary artery (MPA) but is fed by the patent ductus arteriosus (PDA), a blood vessel that normally closes at birth. The defect is frequently associated with other heart defects—in this baby’s case, a ventricular septal defect (VSD). The critical aspect of this defect is that the pulmonary blood flow to the left lung arising from the ductus (systemic circulation) is abnormal and obliterated with the closure of the ductus.

At one week of life, Dr. Pastuszko performed a complete surgical repair that entailed ligation and division of the ductus, anastomosis of the discontinuous left pulmonary artery to the main pulmonary artery, as well as closure of the VSD. Such repairs can be particularly challenging and require experienced neonatal surgeons and exceptional surgical and intensive care teams involved in the management of such patients intra- as well as postoperatively.

The baby received specialized postoperative care in Mount Sinai’s dedicated Pediatric Cardiac Intensive Care Unit and was home in one week. She returns periodically to Mount Sinai, where Dr. Pastuszko says her heart functions as that of any other infant.

Asthma affects about 10 percent of children and adults in the United States. When undiagnosed, it can lead to restricted activity, emergency room visits, and hospitalizations. Diagnosing asthma can be challenging, however—especially in children who are not able to complete pulmonary function tests (PFTs) that help in asthma assessments.

A research team led by Supinda Bunyavanich, MD, MPH, MPhil, Associate Professor of Pediatrics, and Genetics and Genomic Sciences, Icahn School of Medicine at Mount Sinai, provided a novel solution for this diagnostic challenge with the discovery of a nasal brush-based biomarker of asthma. Their findings were published on June 11, 2018, in Scientific Reports. The study included collaborators from Stanford University School of Medicine and Harvard Medical School.

The research team phenotyped and collected nasal brushes from 190 individuals with asthma and controls. They performed RNA sequencing on material from these brushes and then applied machine learning to identify a 90-gene biomarker indicative of asthma status. When applied to independent subjects with and without asthma, the nasal biomarker of asthma had 99.4 percent accuracy. The researchers also tested the biomarker on subjects with other respiratory conditions, finding that it had a low to zero rate of misclassifying other conditions as asthma.

Following validation in large, prospective cohorts, the researchers believe this classifier could be developed into a nasal biomarker of asthma for use in primary care settings. “Clinicians could brush a patient’s nose, which would take seconds, and receive an automated interpretation by the algorithm we identified of ‘asthma’ or ‘no asthma,’” says Dr. Bunyavanich. “Our nasal biomarker of asthma could improve the ease and accuracy of diagnosing asthma so that patients can be appropriately treated.”

HW was born with obstructed kidneys and moved to the New York City area shortly before his first birthday, when he presented to The Mount Sinai Hospital’s Pediatric Nephrology team with abnormal renal function. His condition slowly deteriorated, resulting in end-stage kidney disease, for which he received a kidney donated by his father when HW was 7 years old. There were no complications from the transplant or the immunosuppression medications.

He was doing very well until January 2018, four and one-half years after transplant, when he presented with abdominal pain and loose stools. Initially, the pain was mild, but his symptoms quickly progressed, resulting in severe abdominal pain and cramping, along with 7 to 10 loose bowel movements per day that all contained blood and mucus. His appetite diminished, and he was missing school and unable to participate in sports.

HW was seen by Jeffrey M. Saland, MD, MSCR, Chief of Pediatric Nephrology and Hypertension, who referred him to Nanci S. Pittman, MD, Assistant Professor of Pediatrics (Gastroenterology). He was found to have anemia, low protein in his blood, and elevated inflammatory markers in his blood and stool. After all infectious causes were ruled out, HW underwent an upper endoscopy and colonoscopy that revealed a markedly inflamed colon with deep linear ulcerations and active bleeding, findings consistent with inflammatory bowel disease (IBD). Biopsy samples were evaluated by pathologists and were consistent with IBD.

Although his clinical presentation and endoscopic findings were consistent with a diagnosis of IBD, the clinical team wanted to be certain his condition was not related to his other medical issues. After consultations with pathology colleagues, the possibility of drug toxicity from one of HW’s immunosuppressive medications was raised—while this side effect is very rare, his biopsies had subtle features supporting a possible drug toxicity. The three medical teams decided to stop this medication and replace it with a different immunosuppressive medication before labeling him and treating him for IBD.

With this change in his immunosuppression, his symptoms slowly resolved and he returned to his usual state of good health without any signs of rejection. HW was able to return to school and resume his normal social life and participation in sports.

Each year in the United States, more than 20,000 children are born extremely prematurely (at less than 29 weeks of gestation), more than the number of all childhood cancer cases combined. Survival rates following preterm birth have improved dramatically, however, allowing researchers to switch their focus to ensuring healthy outcomes in these vulnerable infants.

Alan Groves, MBChB, Associate Professor of Pediatrics (Newborn Medicine), has spent the last decade focused on improving imaging methods to enhance understanding of heart function in premature infants. Dr. Groves led the first team in the world to systematically develop cardiac magnetic resonance (CMR) imaging to study newborns. Today, his group is able to image the hearts of infants weighing under 1 kg (around 2 lbs.) at sub-millimeter resolution, providing more than 27,000 measurement points of muscle mass (see figure). Crucially, CMR imaging in newborns does not use any radiation and does not require sedation or anesthesia.

In a paper published in November 2018 in the journal Pediatric Research, Dr. Groves presented data showing that the hearts of infants born extremely prematurely have a 64 percent increase in mass in the newborn period, and that the shape of these hearts is also significantly altered. This “remodeling” of the heart has also been shown to occur in young adults who were born prematurely, and is known to impair heart function during exercise.

Dr. Groves recently received funding from the American Heart Association to study a group of 7- to 12-year-olds who were born extremely prematurely to track heart growth through childhood. He will also study a new larger cohort of extremely premature infants to try to identify the triggers and mechanisms of abnormal heart growth. Since cardiac remodeling in adulthood often responds to medical therapy, Dr. Groves believes that identifying the triggers and mechanisms of remodeling following premature birth can lead to development of therapies that prevent or reverse remodeling, ensuring these children grow up to lead healthy and active lives.

A New Technique Utilizing a Robotic Approach in Urology

Pasquale Casale, MD, MHA, a world-renowned pioneer in pediatric robotic surgery who has recently joined the faculty at the Icahn School of Medicine at Mount Sinai; and Jeffrey Stock, MD, Associate Clinical Professor of Urology, and Pediatrics, a leader in minimally invasive procedures, including robotics—who together have a combined experience of more than 30 years in advancing these types of procedures—are at the forefront of these latest efforts.

Utilizing the robot for this complex procedure allows very fine movements resulting in minimal trauma and allows in situ surgery where there is minimal manipulation of tissue and organs, reducing the chance of scar formation and complications. The bladder and ureters are approached in an extravesical and intravesical manner fashioned after the approach for a robotic radical prostatectomy. The extravesical portion is posterior and the intravesical is anterior. Only two working ports and a camera port are utilized. A 14-gauge angio catheter with cystoscopic graspers are used for retraction.

The extra- and intravesical simultaneous approach allows the surgeons to completely excise the large cecoureteroceles, reinforce the bladder floor and bladder neck circumferentially, and reimplant the duplex ureters. The ureters are reimplanted in a combined extra- and intravesical fashion without doing a cross-trigonal procedure. The bladder is then anchored anteriorly back in place to its normal anatomic location. All catheters are in place for 48 hours, then removed. If the child has a suprapubic tube, it is removed after two successful voids.

Mount Sinai is one of only a few academic medical centers in the country to do this procedure utilizing robotics, although this technique is unique with simultaneous intra- and extravesical approaches that allow the physicians to discharge the patient tube-free within 48 hours. While this technique is still in its infancy, Dr. Casale and Dr. Stock have added to their experience by performing four procedures in 2018 alone, and have found that, to date, it has been safe and effective. They will continue to evaluate its long-term efficacy. 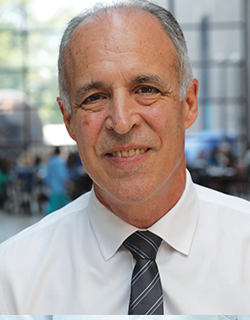 Renowned transplant hepatologist John Bucuvalas, MD, has been named Senior Faculty, Vice Chair of Faculty Affairs, and Chief of the Division of Hepatology in the Jack and Lucy Clark Department of Pediatrics at the Icahn School of Medicine at Mount Sinai and Mount Sinai Kravis Children’s Hospital. He has also been appointed Director of Solid Organ Transplant Outreach for the Recanati/Miller Transplantation Institute at Mount Sinai.

Dr. Bucuvalas has advanced training in pediatrics and gastroenterology, as well as vast expertise in liver diseases, enabling him to effectively evaluate the youngest liver transplant candidates and manage their care both before and after transplantation, including immunosuppression issues and transplant-associated infectious diseases.

His primary research efforts, funded by the National Institutes of Health, focus on clinical and translational work to define predictors of operational tolerance; to predict risk for and determine the mechanism of long-term structural liver allograft injury; and to define strategies to mitigate non-adherence in transplant recipients. He has published broadly on outcomes following liver transplantation, non-adherence, late liver graft injury, immunosuppression withdrawal, and functional outcomes of liver transplantation.

Prior to joining Mount Sinai, Dr. Bucuvalas was Professor of Pediatrics and Director of the Integrated Solid Organ Transplant Program at Cincinnati Children’s Hospital Medical Center. 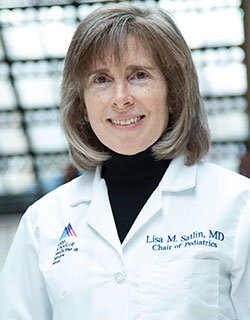 Over the past year, our Department of Pediatrics continued to experience tremendous growth and success in our academic missions of clinical care, research, and education. Among our accomplishments:

I am delighted to spotlight some of our faculty’s exciting innovative research discoveries and new treatment approaches focused on improving children’s health.