For more than 100 years, Mount Sinai has distinguished itself with clinical and research excellence to help individuals with disability maximize their self-sufficiency and mobility so that they can return to their lives and community.

Our inpatient and outpatient medical rehabilitation programs and services address a wide variety of needs, from the onset of disability through long-term—even life-long—management of conditions such as spinal cord and brain injuries, stroke, amputation, chronic pain, sports injuries, and other physical and cognitive challenges.

The Icahn School of Medicine at Mount Sinai is one of only 14 national institutions and the only program in New York State awarded a five-year $2.2 million Spinal Cord Injury Model System grant from the National Institute on Disability, Independent Living, and Rehabilitation Research. The Icahn School of Medicine is also a federally funded Traumatic Brain Injury Model System and is one of only nine centers in the United States to hold both grants.

The annual incidence of new spinal cord injury (SCI) cases in the United States is 17,000, with vehicle crashes as the leading cause of injury, followed by falls, acts of violence, and sports activities. As a selected Center, Mount Sinai will contribute to and participate in

independent and collaborative research, and provide information and resources to individuals with SCI, their family and caregivers, health care professionals, and the general public.

Specifically, Mount Sinai will provide a regional multidisciplinary system of care that includes a number of innovative clinical programs for individuals with SCI in the New York City metropolitan area; contribute longitudinal data to the SCI national database; conduct one local research project to evaluate a novel approach to clinical inpatient treatment; and participate in three collaborative module research projects with other Model System centers.

Professor, Department of Rehabilitation Medicine, Mount Sinai Health System: “We want to help patients and their families receive excellent care and also provide them with innovative and groundbreaking technological advances and clinical trials that will change their lives.”

The Late Effects of Traumatic Brain Injury (LE-TBI) project is a National Institutes of Health-funded study that aims to characterize the long-term clinical and pathological consequences of TBI and to investigate the relationships between TBI, chronic traumatic

encephalopathy (CTE), and known dementia subtypes including Alzheimer’s disease. Mount Sinai’s Kristen Dams-O’Connor, PhD, is the principal investigator for this $6 million multicenter study, which is being funded by the National Institute of Neurological Disorders and Stroke and the Eunice Kennedy Shriver National Institute of Child Health and Human Development.

More than 100 individuals with history of TBI have participated in the study, which involves an extensive clinical evaluation, including neurobehavioral and motor testing and neuroimaging (3T MRI), and genetic data collection. For those who choose to donate their brain upon death, a post-mortem neuropathology workup, including state-of-the-art imaging and whole-brain serial sectioning, will be performed. The methods will allow for

neuropathological comparison between single, mild vs. single, and moderate-severe TBI vs. repetitive trauma utilizing samples from LE-TBI and some of the largest community-based neurodegenerative brain banks in the world.

The LE-TBI study represents the most systematic and scientifically rigorous effort to develop a complete understanding of the long-term outcomes of TBI by utilizing extensive in-vivo clinical characterization and state-of-the-art ex-vivo methods. This prospective longitudinal study with autopsy endpoints will not only create the first TBI-specific brain bank in the country, but will also establish preliminary neuropathological criteria for posttraumatic neurodegeneration as a precursor to identifying in-vivo markers of decline.

Link Found Between Traumatic Brain Injury and Late-Life Parkinson’s, but Not Alzheimer’s Disease

Traumatic brain injury (TBI) with a loss of consciousness (LOC) may be associated with later development of Parkinson’s disease but not Alzheimer’s disease or incident dementia, according to a study conducted at the Icahn School of Medicine at Mount Sinai, the University of Washington School of Medicine, and Rush University Medical Center. The research, published in 2016 in JAMA Neurology, contradicts common assumptions about the relationship between TBI and Alzheimer’s disease as found in other high-profile studies.

Kristen Dams-O’Connor, PhD, Director of the Brain Injury Research Center and Associate Professor of Rehabilitation Medicine at the Icahn School of Medicine at Mount Sinai, was co-author of the study, which was led by Paul Crane, MD, MPH, Professor of Medicine, University of Washington School of Medicine. It builds upon the work of an earlier project she headed that was published in 2013 in the Journal of Neurology, Neurosurgery & Psychiatry.

There is great interest in the late effects of TBI and the widespread public health implications. The U.S. Centers for Disease Control and Prevention estimates that more than 1.3 million Americans visit an emergency department each year because of a TBI-related injury.

or biennial cognitive and clinical testing. Of this group, 865 people had had a TBI with LOC at some point before the study began and 142 of them had been unconscious for more than

one hour. The researchers evaluated associations between TBI and late-life clinical outcomes, such as dementia, Alzheimer’s disease, mild cognitive impairment, Parkinson’s disease, and change in Parkinsonian signs. Roughly 23 percent of the study group had brain

autopsies, and in that group researchers evaluated the relationship between TBI and neuropathological findings. Neuropathology is considered the gold standard for diagnosing neurodegenerative disease.

No statistically significant relationship between TBI with LOC and dementia risk was discovered. Results for Alzheimer’s disease (diagnosed in 1,322 study participants) were similar. However, regression data showed a strong association between TBI with LOC greater than an hour and Parkinson’s disease (117 cases during the study). 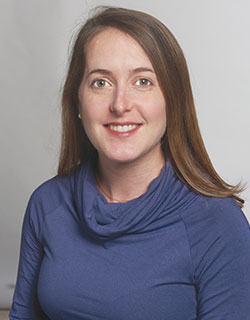 Dr. Dams-O’Connor’s research investigating long-term clinical and pathological outcomes associated with traumatic brain injury (TBI) is funded by the National Institutes of Health (NIH). She serves as Co-Project Director of the New York TBI Model System and Director of Research in the Mount Sinai Injury Control Research Center, a program funded by the U.S. Centers for Disease Control and Prevention (CDC). Since 2014, she has also served as Co-Director of the BIRC at Mount Sinai.

Dr. Dams-O’Connor has an extensive background in clinical neuropsychology, including postgraduate training in advanced statistical and psychometric methods, and expertise in the design and implementation of TBI clinical trials, measurement, and outcomes research.

Her research is currently supported by federal grants from the NIH, National Institute on Disability, Independent Living, and Rehabilitation Research, and the CDC.

It was a volunteer experience like few others: being a physician selected to treat athletes at the Rio 2016 Summer Olympics and later, the Paralympics. “I was part of a team that evaluated acute and chronic musculoskeletal sports-related injuries,” says Gerardo Miranda-Comas, MD, Assistant Professor of Rehabilitation Medicine, Icahn School of Medicine at Mount Sinai (in photo). For Dr. Miranda-Comas, “The Paralympics, especially, was an important learning experience. 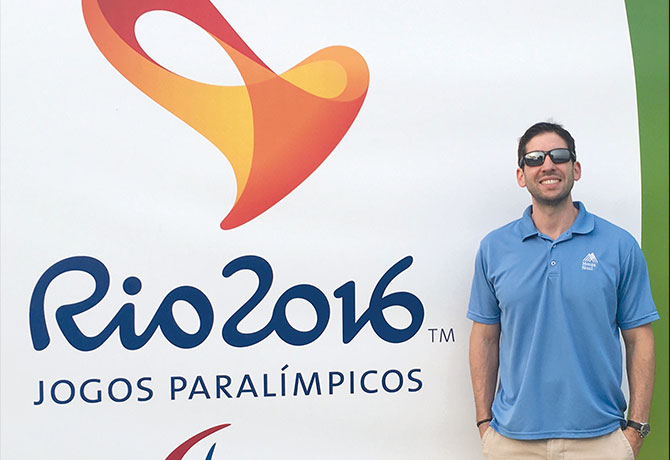 The atmosphere in the Paralympic village was unreal: it was a small city filled with elite athletes with disability and a vast variety of assistive devices for mobility that included prosthesis, crutches, wheelchairs, and other adaptive equipment.”

But mostly, he says, “I felt an uplifting human spirit, where the person with a physical, mental, or visual impairment was applauded as loudly as the able-bodied individual just a few weeks before.”

Founded in 2003 by James Cesario, MA, a paraplegic since the age of 18, the more than 100 Life Challenge trips have given participants—all are paraplegics or quadriplegics with spinal cord injuries (SCI) who use wheelchairs to get around—the confidence and encouragement they often lack after a life-changing disability. “You can see the excitement in their faces,” Mr. Cesario says. “People say their lives changed after these trips. They feel like, ‘If I can do this, then I can do anything.’”

“At First, It Seemed Impossible. I Never Thought I Could Do It.”

Farzana Ali (in photo, center) is completing her first year of medical school at the Jacobs School of Medicine and Biomedical Science at the University at Buffalo with plans of becoming a radiologist. She already has a Masters in Public Health from Stony Brook University. It would seem a daunting road for anyone, but for a quadriplegic like Ms. Ali, a positive attitude, perseverance, and a remarkably sunny disposition continue to push her forward. 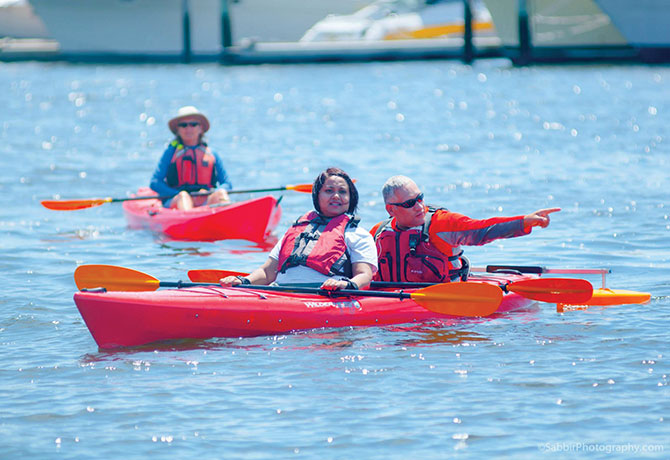 Ms. Ali suffered a C5-C6 spinal cord injury in 2005, at the age of 21, when the car she was in with her family was hit by a drunk driver. Her sister was killed. After initial surgery on Long Island near the scene of the accident, Ms. Ali was treated at The Mount Sinai Hospital, where she stayed for seven months. After two more surgeries, she underwent intense physical, occupational, and speech therapy.

Later, she participated in Mount Sinai’s specialized outpatient programs that have changed her outlook on her new life. Through the Life Challenge program, for example, she went on ski trips, kayaked, and even did skydiving. “At first, it seemed impossible,” she recalls. “I never thought I could do it until I actually did it. But the environment makes it doable,” she says. “Unless we try, we don’t know what we are capable of.”

“You Bond With Other People to Face Your Challenges Together.”

In 1999, 17-year-old Namel Norris was at a family birthday party when the gun his cousin was playing with accidentally misfired, striking Namel in the neck. His C2 injury paralyzed

him from the chest down and left him in a wheelchair. A few months later, his mother introduced him to another young man from the neighborhood, who also was a wheelchair user after being struck by a stray bullet. The two became close friends, owing in part to their common interest in hip-hop. 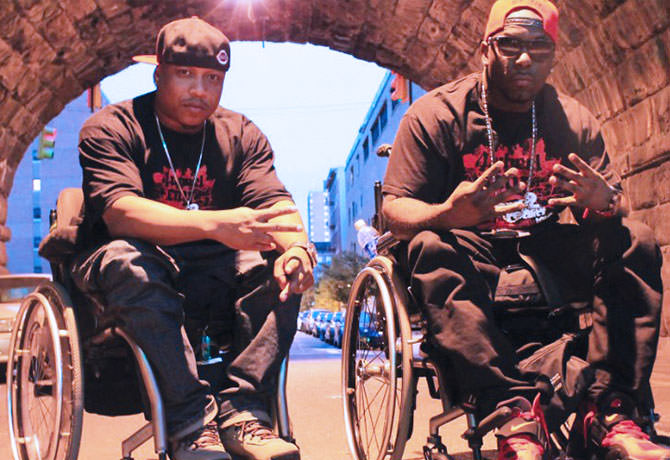 In 2006—the same year that Mr. Norris earned a bachelor’s degree in Business Administration from Lehman College in New York City—they formed 4 Wheel City, a nonprofit organization with a mission to “inspire, educate, advocate, and entertain.” Today, Namel “Tapwaterz” Norris, right, and Ricardo “Rickfire” Velasquez, left, perform what they call “rap therapy” at nursing facilities and rehabilitation centers, including the rehabilitation center at Mount Sinai, where they had both been treated.

Mr. Norris, who also mentors SCI patients at Mount Sinai, has benefited from the Life Challenge program. He had been an avid basketball player until his injury and was eager to

engage in physical activities again. Through the program he was able to play laser tag, jet ski on Lake George, New York, and learn to swim.

“It’s a great program,” he says. “It’s a comfort being with others facing a similar situation and knowing they understand. And, when you see that they can do these sports, it gives you encouragement. You bond with other people to face your challenges together. You support

each other and have fun together. That’s what’s cool about it.”

In 2016, Kristjan T. Ragnarsson, MD, decided to step down as the Chair after serving for

three successful decades, but he will continue to serve as Emeritus Chairman and Professor. As the new Chair, I look forward to building on his and the Department’s remarkable achievements to further our mission to serve individuals with disability.

Among our 2016 notable accomplishments:

We are excited to build on this strong foundation to accelerate innovation and care for individuals with disability.