Recognized as among the top children’s hospitals in several specialties, Mount Sinai has created an alliance with the Children’s Hospital of Philadelphia, one of the nation’s leading hospitals, to give children in the New York metropolitan area access to an unprecedented scope of pediatric services with access to the newest treatments and expertise in fetal medicine, pediatric cardiac care, and pediatric oncology.

Kravis Children’s Hospital at Mount Sinai is the clinical home of Mount Sinai’s Department of Pediatrics, and we share a common vision to improve the health of infants, children, adolescents, and young adults through prevention, early detection of disease, and evidence-based treatment, with an emphasis placed on quality and safety of care.

Emely was born on September 3, 2015, at Mount Sinai West after a full-term and uncomplicated pregnancy. Twenty-four hours later, she was admitted to the neonatal intensive care unit (NICU) for hypoglycemia and respiratory depression requiring continuous positive airway pressure. Her physical examination was significant for a distended abdomen with hepatosplenomegaly and skin nodules on her right leg. A complete blood count revealed a white blood cell count of 166,000/ul with 80 percent blasts. She was transferred to The Mount Sinai Hospital NICU. By review of the smear (see image) and flow cytometry studies, she was diagnosed with acute myeloid leukemia (AML).

Congenital leukemia is extremely rare with an estimated one to five cases per million newborns. If encountered, the vast majority of cases occur in children with Down syndrome as a self-resolving syndrome called transient myeloproliferative syndrome. But Emely was a non-Down newborn, and overall prognosis for AML in this population is poor with survival rates of 30 percent reported.

To stabilize Emely and to reduce her white blood cell count, Emely underwent an exchange transfusion followed by low-dose cytarabine for a week. A week later, Emely’s medical status was much improved. She was extubated and tolerated nasogastric feeds. A bone marrow aspiration showed her leukemia was in remission.

Before she was two weeks old, Emely was stable and strong enough to start multi-agent chemotherapy for AML from September 2015 to February 2016. Her course was complicated by multiple, but expected, side effects, such as bacteremia, hypoglycemia, renal dysfunction, febrile neutropenia, infections, mucositis, and an inability to feed, requiring continued nasogastric tube feedings. On February 24, 2016, Emely completed chemotherapy. That summer, her parents brought her to their native Dominican Republic to introduce her to her grandparents. Emely remains in remission, and the child’s Mount Sinai pediatrician, Allison Gault, MD, says Emely is developing normally.

bronchoscopy, an important diagnostic tool that has been used in pediatric pulmonary care for decades. By taking advantage of improved technology and increased interdisciplinary collaboration, Dr. Vicencio, for example, is increasing the use of the flexible cryoprobe. Chantal Spencer, MD, Assistant Professor of Pediatrics (Pulmonology), is spearheading this initiative.

Cryotherapy has been determined to be extremely useful in select patients with obstructing airway lesions that are not easily accessed by standard surgical approaches, or for patients who have failed traditional approaches due to recurrent scarring. One possible downside along with the success: freezing an obstructing lesion does not result in immediate restoration of airway patency, but rather a slow involution that could take several weeks for full effect.

Still, they have noted dramatic and lasting improvements in airway patency in several patients who previously failed traditional treatments (see images). Also, for one patient with autoimmune disease affecting the airway, cryotherapy has been instrumental in preventing stenosis.

Managing Epilepsy With a Responsive Neurostimulator

Daniel is an 18-year-old with epilepsy due to tuberous sclerosis (TS), a common cause of severe epilepsy and a typically inherited disorder affecting multiple organ systems. TS leads to skin problems, benign tumors of the kidneys and heart, dental abnormalities, and brain lesions. Nervous system issues include tubers that cause epilepsy and subependymal giant cell astrocytomas (SEGA), benign tumors that create obstructive hydrocephalus. TS patients can have normal intelligence, like Daniel, or have a wide array of cognitive and behavioral problems.

After trying a variety of medications that could not stop his seizures, by age 10 Daniel had surgery for the SEGA followed by two other sets of epilepsy surgeries to remove epileptogenic tubers and abnormal cortical areas thought to be responsible for his epilepsy. An additional surgery for a vagus nerve stimulator was done, with no benefit to his seizure control.

In 2016, Daniel was offered the option to receive the RNS® System, a responsive neurostimulation device by NeuroPace. Since the TS patient’s epilepsy burden can be a global network issue, his epilepsy team felt that this new technological advance in epilepsy management could be applied to his case.

Prior to Daniel’s case, Mount Sinai had implanted the RNS device in the world’s two youngest patients, and achieved another first by implanting the device in a child with Rasmussen’s Encephalitis, a rare disorder that only hemispherotomy could effectively treat in the past.

Daniel became the first person with TS to receive a NeuroPace device when it was implanted in 2016. As a defibrillator would do for the heart, the RNS device is programmed to detect abnormal epileptiform discharges that may result in a seizure and to stimulate those areas of the brain to prevent the abnormal discharges from resulting in a seizure.

Now, Daniel visits his neurologists monthly to program and adjust the RNS. But on a daily basis, he downloads data captured by the device, and when he has a seizure, he passes a small magnet over the RNS device to mark the seizure. Already, he has experienced improvements in the number and severity of seizures, and the device seems to work better with time as it modulates and trains the brain away from having seizures.

Annemarie Stroustrup, MD, MPH, Associate Professor of Pediatrics (Newborn Medicine) and Environmental Medicine and Public Health, and member of The Mindich Child Health and Development Institute, is leading a study investigating the role of hospital-based environmental exposures on neurodevelopmental outcomes of preterm infants.

In NICU-HEALTH, preterm infants exposed to specific mixtures of phthalates during the NICU hospitalization demonstrated more rapid maturation of certain neurobehavioral domains, including attention and habituation (see chart). These findings, presented at the 2016 annual meeting of the International Society of Exposure Science, were surprising. The most premature and sickest infants who have the highest exposure to medical equipment, and therefore to phthalates, were expected to have the most significant developmental delays.

Infliximab (IFX) and other monoclonal antibodies targeting tumor necrosis factor are a major advance in the management of inflammatory bowel disease (IBD), but physicians still see a loss of response in up to 50 percent of patients within one year of initiation. This is likely attributed to low drug concentrations. 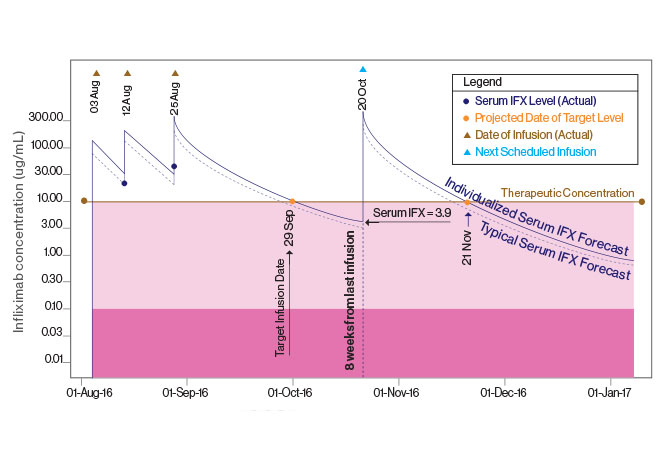 The figure was created as an example of a PK dashboard IFX dosing schedule for an individual with moderate to severely active IBD whom a physician may commonly encounter. The standard induction dosing is 3 infusions at weeks 0, 2, and 6. The dashboard accounts for dose, serum IFX levels, and laboratory values, and, in this case predicts rapid drug clearance. The 4th infusion, known as the 1st maintenance infusion, is typically 8 weeks after the 3rd infusion.

With the dashboard, one can select the ideal trough concentration shown to be associated with clinical response. The goal for this patient was set at 10 ug/mL. To accomplish this, the patient would need to get the 4th infusion 4 weeks earlier. If the patient had waited the standard 8 weeks for the next dose, the drug trough concentration would have been 3.9 ug/mL, which is too low.

A Prenatal Diagnosis of a Complex Heart Defect

A 22-year-old was 31 weeks pregnant in June 2015, when her obstetrician suspected a congenital heart problem on a routine ultrasound. She visited Ira A. Parness, MD, Chief, and the Richard J. Golinko, MD, Professor of Pediatric Cardiology, who did a fetal echocardiogram to decipher the extraordinarily complex and rare form of single left ventricle with atretic aortic valve and transposed lung artery arising from the single ventricle. The parents were enrolled in the Fetal Heart Program and were counseled extensively on the normal heart, the heart defect that affected their fetus, as well as the complex set of procedures planned for after birth.

The stage 1 procedure was itself performed in hybrid form: the first operation, bilateral pulmonary artery banding, at 11 days of age, and the second, at 14 days. The male newborn’s postoperative course was complicated by right diaphragm paralysis that ultimately recovered, which in the short term required diaphragm surgery for temporary tightening. Poor feeding required the collaboration of nutritionists and a brief stay in the Sunshine Children’s Home and Rehab Center in Ossining, New York, for nasogastric feedings until the parents became comfortable with home nasogastric feedings.

Ultimately, he began feeding orally, completely. His development continued, and he underwent stage 2 Glenn shunt at 6 months of age. Stage 3 will occur at 3 to 4 years of age as long as adequate growth is present. Today, he continues to grow and develop normally and has frequent follow-ups with Dr. Parness.

The now 22-year-old male patient had been known to providers and nurses at Mount Sinai since his infancy, when he was diagnosed with ADPKD (autosomal dominant polycystic kidney disease). But a renal transplant had to be delayed because he developed a rare liver cancer—hepatoblastoma. Through close collaboration with nephrology and pediatric oncology, he was able to tolerate chemotherapy while also receiving dialysis, which allowed for a renal transplant as a toddler.

In 2016, he presented with tenderness of the abdomen and was diagnosed with an abdominal mass just underneath his transplanted kidney. Biopsy revealed post-transplant lymphoproliferative disease, a rare form of lymphoma seen in patients who are on chronic immunosuppression after solid organ transplants. The patient once again required chemotherapy, but after 19 years, having already worked years longer than average, the kidney transplant function was inevitably lower than it had been in the first years after transplant. This lower function was very concerning since the chemotherapy approach could be nephrotoxic, risking kidney failure.

Jeffrey M. Saland, MD, Chief, Pediatric Nephrology and Hypertension, and Birte Wistinghausen, MD, Medical Director and Interim Chief, Pediatric Hematology and Oncology, and their teams devised a modified chemotherapy plan. Overall, the patient tolerated the treatment well, but he experienced, as expected, more severe side effects due to the prior chemotherapy, lower renal function, and the need to adjust immunosuppression.

After completion of chemotherapy, he was found to have a residual mass close to the transplanted kidney and major vessels. Peter S. Midulla, MD, Assistant Professor of Surgery, and Pediatrics, and Daniel Labow, MD, Associate Professor of Surgery, at the Icahn School of Medicine at Mount Sinai, were able to completely remove it without any injury to the transplanted kidney or vessels. The mass was found to be completely necrotic. The patient is now in complete remission and doing well, with renal function at the same level as before his treatment.

The Department of Pediatrics has continued to experience significant growth and success in our academic missions of clinical care, research, and education.

Among our 2016 notable accomplishments were:

We expect to build on these successes in 2017 as we accelerate innovation and discovery focused on improving children’s health.