After many years of suffering from dystonia in his hand, Terry Walker, a classically trained pianist, finally sought treatment at Mount Sinai

Terry Walker is a classically trained pianist who dedicated his career to playing music. He moved from Kansas to New York City to study the piano with a nationally known pianist from the Juilliard School, and later studied Accompanying at Julliard. Following his career at All My Children, a role that won him several Daytime Emmy Awards for his musical compositions Terry decided to refresh his training as a pianist and relearn technically-demanding concert pieces. He continued to play piano for weekly church services, as he has for 20 years, at a church in Newark, New Jersey. 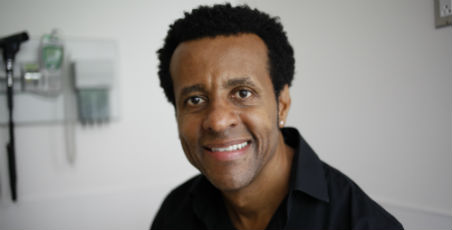 As Terry began playing challenging piano pieces on a regular basis, he noticed a strange spasm happening in his left forefinger and thumb. His finger would curl up uncomfortably in the middle of a piece, leaving him unable to play. This happened so frequently that Terry started having to adjust his musical arrangements to account for the problem.

Unsure what to do, Terry began physical therapy to strengthen his hand and forearm, which did not help. He tried acupuncture but that provided only temporary relief. Whenever he had an important concert coming up, he would create a splint that would prevent his finger from curving and allow him to keep playing. Still, the problem kept returning.

Finally Terry saw a physician who told him it sounded like he had a condition called dystonia. The third most common neurological condition, dystonia is characterized by abnormal, involuntary, and sometimes painful muscle contractions. It is a particular problem in musicians who use the same muscle groups repeatedly over decades, and if untreated it can be career-ending. Legendary pianist Leon Fleisher was diagnosed with dystonia, and spent much of his career composing pieces with only his left hand before finding treatment.

Terry met Steven Frucht, MD, Director of the Movement Disorders Division in the Robert and John M. Bendheim Parkinson and Movement Disorders Center at The Mount Sinai Hospital. Dr. Frucht is a classically trained pianist and violinist himself, and has dedicated his career to diagnosing and treating dystonia. After playing an electric keyboard in Dr. Frucht’s office, Terry learned that he did in fact have focal dystonia in his left hand.

Dr. Frucht recommended Terry see David Simpson, MD, Professor of Neurology at Mount Sinai, for treatment. Dr. Simpson began treating Terry with injections of botulinum toxin (commercially known as Botox®) in his forearm. Botulinum toxin is injected where the nerve meets the muscle and has been shown to significantly relieve the symptoms of dystonia.

Terry had his first injection last March, and it immediately relieved his symptoms. “It was a miracle, truly. I was at the point where I almost started to cry. Suddenly, I could play the piano like I used to,” he said.