Andrew had every tic in the book and was described as the "worst case of Tourette's" many of his doctors had ever seen; after deep brain stimulation, he finds relief from his involuntary tics

Andrew Joannou has chronic, severe Tourette syndrome. There is no known cure for Tourette's. 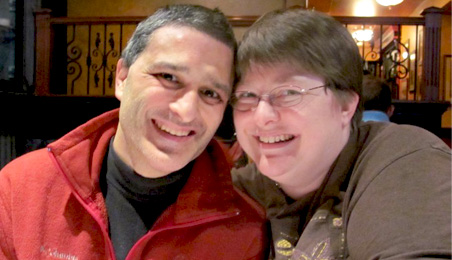 Andrew showed symptoms of Tourette syndrome at 6-years-old, but he did not receive a proper diagnosis until the age of 13 – at which point, he was given high amounts of sedatives to control his tics. A tic is defined as an involuntary, unwanted movement or noise that happens many times per day. Andrew had severe involuntary physical and vocal tics. He could not walk more than a few feet without one of his legs buckling, he spit, yelled curse words and racial slurs, and hit himself in the forehead. This severe form of Tourette's is uncommon. Of all Tourette's patients in the United States of America (U.S.), only 10-15 percent of people with this condition have such severe tics, or 1 out of every 1,700 Americans.

As a teen growing up in the United Kingdom (UK), Andrew was often misunderstood, and he was severely attacked in the street and on public transportation. He had a hard time finding a job and became severely depressed, as is too often the case for patients with severe Tourette's.

After attending a Tourette syndrome conference in the U.S., Andrew met his future wife Amy and moved to America. Andrew first heard about deep brain stimulation (DBS) for the treatment of Tourette's in 2010. After researching DBS and speaking with his family and friends, Andrew decided to see Mount Sinai neurosurgeon Brian H. Kopell, MD, Director of the Center for Neuromodulation at Mount Sinai talk about this advanced medical treatment.

After having DBS, Andrew's tics have reduced by about 80 percent. He can now work a full day of work without the exhausting physical tics or the verbal tics disrupting his coworkers.

Andrew's tics were so painful before his brain surgery that he was constantly on pain medications. Now after having undergone DBS, he is pain-free, and he has been able to cut out all of the pain medications.

However, the best part of life post-DBS for Andrew is being able to walk hand-in-hand with Amy. As Andrew explains, "It's something I've never been able to do in the 12 1/2 years we've been married. It's true bliss, and something most couples take for granted."

Andrew did not have any hesitations about brain surgery. As he says, "Life is too short to be miserable." Watch this video about Andrew's Tourette's and his experience with deep brain stimulation