Deep brain stimulation erases the debilitating symptoms of severe essential tremor with the turn of a knob, in an instant

As the owner of five theaters, Ben Kolbert knows that despite setbacks and hurdles along the way, the show must go on — even at age 84. When Mr. Kolbert first noticed his hands trembling slightly during everyday tasks such as eating, drinking, and writing in 2000, he did not think of it as an impediment to his exciting and meaningful life. However, as the trembling increased and the everyday tasks became more difficult, he realized that he needed help. 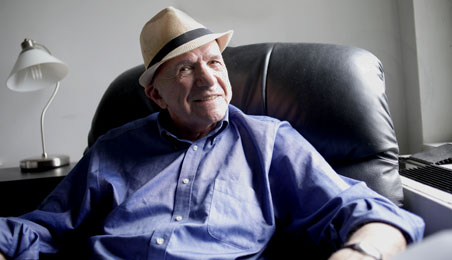 Not long after, he was diagnosed with essential tremor (ET). He took Primidone, an anticonvulsant medication that slows the central nervous system and the tremulous effects of neurological disorders. Even with medication, his conditions continued to worsen. “I had trouble keeping food on my fork when eating, I couldn’t write...it was embarrassing. I didn’t want to live that way; I wouldn’t accept it,” says Mr. Kolbert. Upon seeing a Mount Sinai advertisement for deep brain stimulation (DBS) on television, he decided it was time to seek something more lasting and effective than medication.

The difficulty with ET is that it does not have a clear cause. While it is hereditary in about 50 percent of patients, there is no known reason as to why the other 50 percent with the neurological disorder develop its inhibiting symptoms. While ET is not a life-threatening condition, the gradual worsening of symptoms, such as trembling of the hands, head, and voice, cause noticeable and frustrating handicaps. For many, it is a condition they learn to live with, but in Mr. Kolbert’s case, the trembling was so restricting, he was determined to find a solution.

The Solution Found at Mount Sinai

After calling the number from the television advertisement, Mr. Kolbert set up a consultation with a Mount Sinai neurosurgeon. During his visit to Mount Sinai’s Center for Neuromodulation, it became evident that he was an appropriate candidate for DBS. From there, “I made it my business to go ahead with the procedure.”

“As soon as the surgery took effect,” Mr, Kolbert recalls, “my hands stopped shaking immediately.” For someone with severe ET, this kind of control makes a world of a difference. Mr. Kolbert underwent two DBS treatments, one for each side of the brain. DBS has given him complete control over his hands—something that was unthinkable only moments before the procedure. In addition to the miraculous results, the recovery time from the surgery was incredibly fast: “I had the surgery and went home. I could have gone in a cab myself if my son wasn’t with me.”

DBS Improved Mr. Kolbert’s Quality of Life, Returning Him to His Active Lifestyle

Since his surgeries, Mr. Kolbert has regular checkups every four to five months with his neurologist. Thanks to Mount Sinai’s innovative and dedicated strides in neurosurgical and neurological treatment, the show, and life can go on for Mr. Kolbert. He continues to serve as the president for his theaters and has opened a restaurant as well. His dedication to providing “quality space” for performers has not been stopped by ET, nor has it held him back from being an involved family man. Mr. Kolbert enjoys visiting his three children and eight grandchildren on a regular basis. “I am enjoying old age,” insists Mr. Kolbert. “There was no pain from the procedure, and it has given me a completely different quality of life.”