Mother Given a Second Chance at Life

At 52 years old, Rosanne Mari of Township of Washington in New Jersey was one of those patients who opted for the new procedure

Rosanne had always been given a clean bill during regular check-ups, but in 2010, the loving wife and mother found out she had a cantaloupe-sized growth on one of her ovaries. Surgery determined the source of Rosanne's problem, a malignant growth on her appendix. Tests confirmed that it was cancerous. Rosanne was then referred to Dr. Daniel Labow at The Mount Sinai Medical Center. 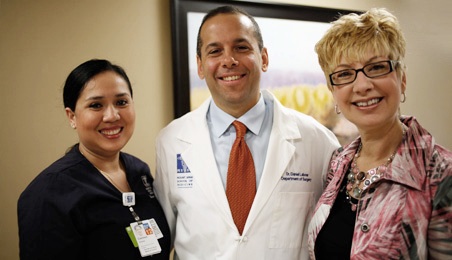 Rosanne didn't know much about HIPEC, but she trusted the wonderful team at Mount Sinai led by Dr. Labow. Rosanne was reluctant about the surgery at first, but after speaking with Dr. Labow, she knew she would be in good hands.

After careful consideration, Rosanne decided to go ahead with the HIPEC procedure in late 2010. Her surgery went smoothly, and she comes in for check-ups every few months. Rosanne credits Dr. Labow for not only saving her life; but for giving her a second chance at life. She says "I am a better, healthier person, and for that I am forever grateful to Dr. Labow."

Getting Back to Life

Rosanne went back to work in 2011. As a personal shopper, she is on her feet for most of the day. She spends time with her husband and son and gets to enjoy living a healthy, normal life. Rosanne can't say enough good things about the HIPEC procedure and wants to share her story with others so they can get a second chance.

She says "My patient story can help others by giving them hope. Nothing in life is a guarantee, but the guarantee for me was that HIPEC was the best treatment."