Indira Dedicates Her Time to Helping Others, and in Her Time of Need, Mount Sinai Takes Care of Her

As a mother and home health aide, Indira Nauth is accustomed to tending to the needs and discomforts of others, so when she first noticed a tingling sensation down her right arm, she didn’t think much of it. However, a year later, the streaks of tingling turned into uninterrupted strokes of disabling pain from her neck down to her right bicep. Her primary care physician, Sameer K. Misra, MD, advised her to seek the expertise of orthopedic and neurology specialists. Despite visiting multiple doctors, Indira’s pain continued to increase. Struggling to feed and shower herself, Indira could no longer assist those she cared for as a home health aide. Sleeping through the night became a nearly impossible feat with little hope of any improvement. Each doctor gave their own diagnosis, ranging from muscle spasms to bone spurs. She was given cortisone with the assurance that the pain would eventually fade on its own, though it continued to be unbearably incapacitating. 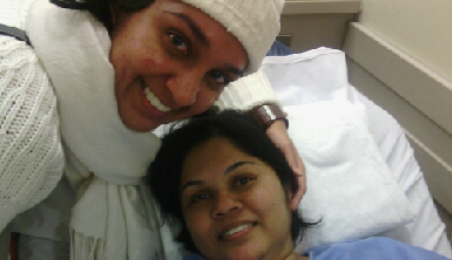 With her pain being an 11 (on a scale of 1-10), it was time to find a solution. Dr. Misra referred her to Mount Sinai spine specialist and neurosurgeon Hongyan Zou, MD, PhD. From the start, Dr. Zou put Indira at ease, assuring her that the Mount Sinai team would find the optimal way to terminate her debilitations. She conducted an extensive neurological evaluation of Indira’s right arm and cervical neck and reviewed magnetic resonance imaging (MRI) scans. The MRI revealed that her pain was nerve related— she was suffering from nerve root impingement, known as radiculopathy, at C5-6 of her cervical spine, and stenosis, the narrowing of the spinal cavity, at C4-5 and C5-6, due to bulding discs. Indira was suffering from degenerative loss of cervical lordosis (curvature of the neck vertebrae). Dr. Zou spent ample time discussing the surgical procedure that could correct the effects of Indira’s conditions. At her second visit, Indira’s family came along to learn more about the procedure, an anterior cervical discectomy and fusion, from Dr. Zou. After talking to Dr. Zou and doing some research on their own, Indira and her family decided that surgery would be the best route to wellness.

The day of surgery, Dr. Zou met with Indira and her family prior to the operation. Dr. Zou made herself available to their questions and concerns, assuring them that Indira was in good hands. The 3-hour surgery was performed through a small incision in the neck. Dr. Zou removed the faulty discs to decompress the spinal cord and nerve roots. To foster vertebral stability, an artificial interbody cage was inserted to fuse the vertebrae together. Indira sayed in the hospital only one night. It was the first time Indira slept through the night in a year.

Improvement by Leaps and Bounds

The next day, Indira and her daughter, Javita, went out for a walk. She was once again able to enjoy the warmth of sunshine and the feeling of fresh air on her face. Excruciating pain no longer consumed her attention— only 24 hours after surgery, Indira was back to focusing on what she loves most— the sun, the outdoors, and her family. “Mom has improved by leaps and bounds,” says Javita, “She is recovering rapidly and is all smiles about her progress.”

Indira’s progress is definitely something to smile about. Since her surgery, Indira is able to eat by herself, comb her hair, and shower independently. “The little things we take for granted, she can now do on her own,” Javita expressed in a message to the Mount Sinai Neurosurgery team. “On behalf of my family, I would like to express our sincere appreciation for your medical expertise in alleviating the pain in my mother’s arm. Your courtesy and professionalism must be commended.” With the pain in her arm and neck gone, Indira is enjoying a bright present and looking forward to an equally bright future.