When an infant from New Orleans was diagnosed with Vein of Galen Malformation, treatment from doctors at Mount Sinai saved his life. 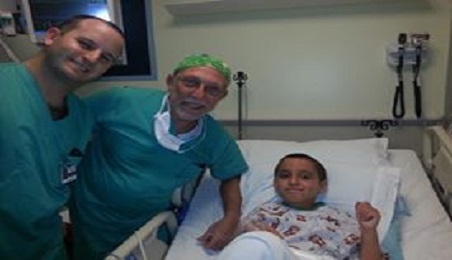 Grant Rechen’s struggle with his health started at just 3 months old when his parents noticed some developmental delay. At six months old Grant was taken to a local neurologist in New Orleans and a CAT scan determined that he had a rare condition called Vein of Galen Malformation. His information was soon thereafter sent to Dr. Alejandro Berenstein, the director of the Pediatric Cerebrovascular Center at Mount Sinai who confirmed his diagnosis and suggested a multiple stage procedure process begin immediately.

Over the next few years Grant’s condition worsened, he began having stroke like symptoms, his jugular veins began closing off, and a small hole in his heart appeared, all of which are side effects of the rare disease.

In 2010, when Grant was three years old, Paula and Ed Rechen decided it was time to take control and find Grant a new doctor. Before coming to New York the Rechen’s struggled with insurance, Louisiana Medicaid told them it would take 6-8 months to get approval. Knowing Grant’s fragile condition, they wrote and hand delivered a letter to the president of Louisiana Medicaid and the next day were granted approval.

By the time Grant arrived at Mount Sinai in 2010 for his first embolization with Dr. Berenstein he was three years old and his jugular veins were 100% occluded. “We saw him [Dr. Berenstein] walking swiftly down the hall with the biggest smile on his face. Practically running and loudly proclaiming “Mrs. Rechen, we did it! We were able to embolize a large part of the mass!””

From 2010 to 2015 Grant Rechen underwent 10 embolizations with Dr. Berenstein at Mount Sinai for his condition. After the most recent successful embolization doctors established that the remainder of the mass was now too small for continued endovascular treatment and suggested targeted radiation.

The Rechen family soon met with Dr. Ghatan and Dr. Choi who would be heading the radiation procedures. “We were nervous to meet the new doctors because we were so used to Dr. Berenstein, however this turned out to be another group of amazing people! Dr. Choi and Dr. Ghatan held the same incredible god given concern and conviction to help Grant by once again giving long hours of study and consultation.”

In June 2016 at nine years old Grant returned to Mount Sinai to receive a one-time radiation treatment which will harden the mass in his brain. This one-time treatment will be monitored over the next three years to establish if the procedure was successful. As of today any neurological issues that the Grant Rechen previously had (headaches, balance issues, etc.) are no longer present.

While Grant continues to recover, the outlook for his prognosis looks promising, something his family has felt since they arrived at Mount Sinai. Years ago it was hard for the Rechen’s to imagine what the next six months would look like for Grant, being told he would best case scenario have “normal intelligence” but that it was not likely.

Today at 9 years old, Grant has far beyond exceeded all expectations. He loves writing and has even won multiple awards at the state level for his works. “The care, concern, time, talent, love, and support you have given to us is simply unprecedented!!! So few people in this world have these great gifts! These gifts are given from God and we are so blessed to have been selected and have the true privilege to be under your care! May God continue to bless all of you and we pray for many more years of healing and health!”