My name is Irene McDonnell. I currently live in Basking Ridge, NJ. I was diagnosed with Essential Thrombocytosis (E.T.), a rare blood disorder approximately 20 years ago when I experienced several miscarriages when trying to have children with my husband.  My bone marrow produces too many platelets, which is the clotting function within our blood. I finally carried my daughter to full term in May of 1999. Two months after giving birth, I was rushed to the E.R. with severe clotting of my major intestinal veins, and I remained in Intensive Care for the better part of the next three months. I experienced many complications during my stay such as severely enlarged spleen, esophageal varices, fluid in my lungs, and the need for over 20 transfusions. I had major clots but also major bleeds at the same time. They were finally able to perform a TIPS procedure where they were able to re-establish blood flow between my portal and hepatic vein through a stent. 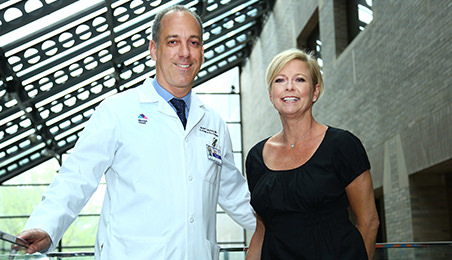 Through drug therapy and constant monitoring, I was able to stay incident free until early 2015 when, for some unknown reason, the shunt that was put in 15 years ago became occluded. My esophageal varices returned and began bleeding again. Since they were unable to reopen my old stent and couldn’t put a new one in the same place, my doctors’ fears were that they might not be able to stop the bleeding going forward. I literally risked bleeding to death. We had to find a way to reduce the portal hypertension.

I was lucky enough to be introduced to Robert Lookstein, MD, and his Interventional Radiology team at Mount Sinai, who were innovating with a new procedure known as a percutaneous mesocaval shunt, that hopefully would help re-establish blood flow and help relieve the esophageal varices. [As of press time, Mount Sinai is the only medical center in the eastern United States offering this new procedure.] Dr. Lookstein’s team collaborated with all departments within Mount Sinai—Hematology/Oncology, Cardiology, Hepatology—that would be responsible for my overall care. They performed the procedure in May 2015. My blood is flowing, my esophageal varices are gone. As of right now, there is no cure for my underlying blood disorder, but with constant drug therapy and monitoring, we hope to keep it in check.

I tell my story because it has been such a humbling experience.  So many people see me on the outside, but have no idea what my body has experienced on the inside.  My family and I are so grateful to Dr. Lookstein and his team, and to all of my doctors at Mount Sinai who literally held my hand and walked me through this whole procedure. I highly recommend Dr. Lookstein, his team, and all the doctors at Mount Sinai for all your medical needs. Thank you for letting share my story.