Claribel Finds Relief from a Lifetime of Seizures

Claribel Suffered from Epileptic Auras for 20 Years before Finding the Cause: a Brain Tumor; after Brain Surgery to Remove the Tumor, Claribel Is Living Seizure-Free and Couldn’t Be Happier 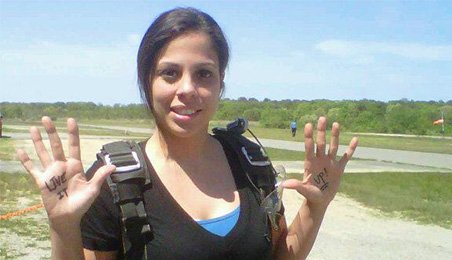 Claribel Moran began having episodes of headaches, nausea, and disorientation, when she was 4-years-old. Desperate to find out what was wrong with her daughter, Claribel's mom went from doctor to doctor looking for answers. At age 13, with no diagnosis or explanation in sight, Claribel told her mom she was done going to doctors. "I told her I can deal with it, I've learned how to cope," explained Claribel. In an interview, she joked to her mom, "One day, they're going to find a brain tumor." Little did she know that nearly 20 years later her prediction would come true.

At age 21, Claribel had her first epileptic seizure while driving home from work. She was rushed to the emergency room and referred to an epileptologist. The doctor told Claribel that she had been having epileptic auras, which are caused by abnormal electrical signals firing in the brain. Symptoms of auras can include nausea, confusion, depression, visual changes, auditory changes, feeling separated from your body, and déjà vu. Claribel's doctor determined that her auras were triggered by hormonal changes due to her period. Claribel was told that because of the hormonal trigger of her auras, it was unlikely she would be able to have children.

Discouraged, but happy to finally have a diagnosis, Claribel started on epilepsy medicines, whose side effects turned out to be worse than her auras. She and her doctor talked about brain surgery to remove a small piece of her brain which was misfiring. Claribel was not interested in surgery and continued to try various medications. For the next 10 years, Claribel worked two jobs at a time, often working through the horrible side effects of the medications or the uneasy feelings of the auras. Determined not to let the auras hold her back, she went sky diving on her 30th birthday.

In the fall of 2013, Claribel had an unexpected surprise: she was pregnant. She was thrilled to find out she could have children – and that wasn't all, since getting pregnant she had stopped having auras. Two months into her pregnancy, Claribel had the worst headache of her life. She went to the emergency room three times; each time being told that she was having a migraine and that they couldn't take an MRI scan or CT scan because she was pregnant. The fourth time she went to the emergency room, she was in so much pain that she lost her baby. The fifth time she went in, she was taken to get an MRI scan, which showed a gangliocytoma, a benign brain tumor, just as she had predicted nearly 20 years earlier.

Claribel was transferred to The Mount Sinai Hospital, where she met with neurosurgeon Raymund L. Yong, MD. While many people facing brain surgery would be nervous, Claribel had never been happier. "I was so happy to finally know what was going on. I knew this was what had been causing my seizures," said Claribel. "Dr. Yong explained everything to me, and we even discussed where I part my hair and where the incision would be, so you could barely even see it after surgery."

Dr. Yong performed a craniotomy to remove almost the entire tumor. He left a small piece, which was close to her visual cortex and could have caused loss of vision if removed.

Claribel returned to work one month after the surgery. She's happy to report she hasn't had a seizure in over five months, the longest she's gone without a seizure or aura since she was 4-years-old.